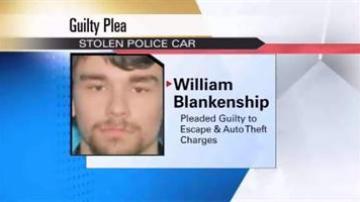 PORTER CO., Ind. -- A 23-year-old man has pleaded guilty to stealing a police squad car and crashing it in northwestern Indiana after being handcuffed and put in the back seat.

William Blankenship of Knox pleaded guilty in a Porter County court Monday to felony charges of escape and auto theft in return for prosecutors dropping charges of fleeing law enforcement and criminal mischief.

The Times of Munster reports the plea agreements calls for a maximum six-year prison sentence and for Blankenship to pay restitution for police car, which was found submerged in a drainage ditch.

Blankenship surrendered Jan. 12, two days after managing to steal the Kouts squad car following a drug-related traffic stop in the town about 25 miles southeast of Gary.

His sentencing hearing is scheduled for Oct. 1.