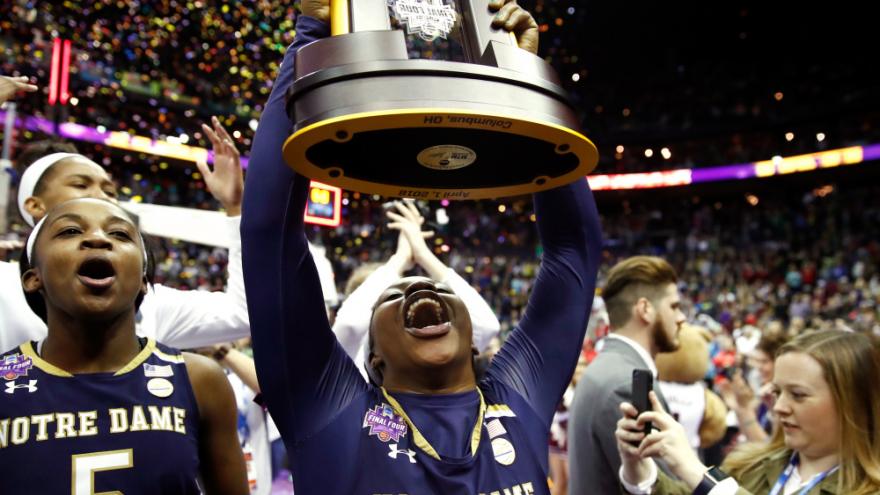 NOTRE DAME, Ind. – Amidst the saddening loss of Kobe Bryant on Sunday after a helicopter crash, many locals and players are reminded of interactions with the basketball legend.

USA Today previously reported on NDWBB guard Arike Ogunbowale and Bryant's interaction after her winning shot at the NCAA tournament in 2018.

(USA Today) -- Notre Dame guard Arike Ogunbowale was stunned when Kobe Bryant tweeted at her after she scored the game-winning shot in the semi-finals of the NCAA tournament to knock off UConn. When they met in person this week? She was nearly speechless.

Bryant surprised Ogunbowale during an appearance on Ellen. Ogunbowale thought she was appearing on the show just to talk about her two stunning game-winners in the Final Four. But, then walked out one of her heroes.

Bryant, who skipped college to go straight to the NBA, said that while he may have a few rings, he’d never hit a game-winner like Ogunbowale’s.

“You gotta understand, that’s like a picture-perfect moment,” he said. “As a kid you dream about ‘5,4,3,2,1 to win a championship — and she actually did it.”

Bryant said he wasn’t rooting for Notre Dame in the first game — after all, he’s friendly with UConn’s Geno Auriemma and his kids are huge Huskies fans. But that didn’t matter to Ogunbowale, who said Bryant was her “idol.”

And then they played some basketball — along with Ice Cube.

It was a terrible game. But Ogunbowale hit the game-winner — again.

Notre Dame recorded her reaction when she first saw Bryant’s tweet congratulating her.

Devastated by the news, Arike tweeted out Sunday "Wait. No. Wait. Not Kobe. Wow."