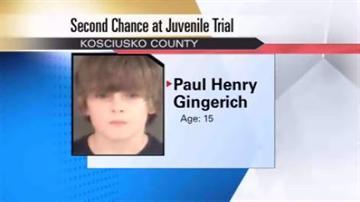 INDIANAPOLIS — A Kosciusko County teen is getting a second chance to be tried in juvenile court.

Fifteen-year-old Paul Henry Gingerich was convicted and sentenced to 25 years in prison for killing a friend's stepfather nearly three years ago.

Michiana News Channel reports that the Indiana Court of Appeals threw out his guilty plea and conviction, saying a juvenile court judge rushed the decision.

The appellate court ordered a new hearing to determine if he should be tried in a juvenile court.