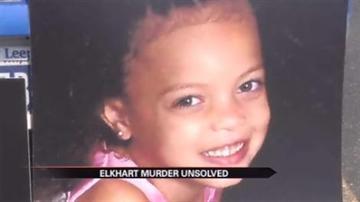 ELKHART, Ind. --  It has been eight months since seven-year-old Kristyana Jackson was shot and killed in front of her home on Kilbourn Street in Elkhart and still no one has been arrested for her murder.

"We know they are doing their job and John calls once a week and they willingly talk to him,” said Kimmie Jackson.

Even though detectives are working around the clock, it has been eight months and still no one has been arrested.

"It's just frustrating that no one has been arrested yet,” said Kimmie Jackson.

"She was my baby and I'm just going to miss that father daughter time,” said John Jackson.

"There is not a day that at least two years aren't shed for her,” said Kimmie Jackson.

Their one year old son J.J. helps them get through the worst days of missing their sweet little green eyed-girl.

"How much he looks like her and some of the things he does is exactly like her at that age,” said Kimmie Jackson.

Kristyana would have been eight at the end of this month.  Her mother says that is part of the reason she has so much faith that her little girls' killer will be brought to justice very soon.

"I just feel like this month will be the month since this is her birthday,” said Kimmie.

Anyone with information regarding Kristyana Jackson’s murder investigation is asked to call 1-800 CRIME STOPPERS.