Kroc Center nearing completion, on schedule and on budget 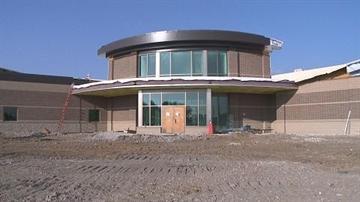 SOUTH BEND, Ind. – A brand new $35 million Ray and Joan Kroc Center near downtown South Bend is looking for help. As the project moves into its final phases, it is on time and on budget according to executive director Major Robert Webster.

The 110,000 square foot facility consists of two levels and offers something for everyone. The ground level main entrance opens up to the core of the facility. From there, wings branch off allowing for the facility to be broken down into wings.

The wing south of the main entrance holds the stage. When finished, professional lighting and sound systems will be installed, allowing for audio and video recording of events using the stage.

On Sundays the stage will be used for a church service held by the Salvation Army. At other times, it can be used for performing arts and other events.

The wing east of the main entrance holds the aquatics center. Families can enter the water park through the walk-in pool. It starts at zero inches deep and slowly slopes off to two and a half feet deep.

From there, stairs take you down into an eddy area where simmers can sit on benches equipped with wall jets for massaging back muscles. Webster says it is an alternative for people who do not enjoy the hot water of hot tubs.

From the eddy area, swimmers can enter a lap pool to the right or the lazy river to the left. The lap pool consists of three lanes for swimming laps while the lazy river twists and turns on a meandering course.

Also in the water park is a 14 person hot tub. The park is equipped with a state of the art water recycling system as well as special ultra violet filtration system.

Webster says with the filtration system, the facility should be free from the chlorine smell many indoor pool facilities deal with.

Off to one side of the gymnasium is a rock climbing wall climbers of all skill levels will be able to use. There is also a spinning room and a room set aside specifically for exercise classes.

This end of the building will also house the Family Resource Center, where community members can apply for a discount on membership at the center and find the food pantry.

Between the gymnasium and the aquatics center is the fitness area, a large open space filled with cardio and weight training machines. On the far wall, a stairway leads to an upper level where heavier free weights will be found.

Another third holds the digital and fine arts rooms where members will be able to take classes and have their work placed on display. A small section attached to this third will be a recording studio.

Equipped with all the latest video and audio recording gear, professional lighting, and a green screen, the studio offers the ability for members to create a demo disc or even a commercial.

On the other side of the lower level will be a youth activities center. Several gaming consoles and table games will fill the room.

Major Webster says, throughout the building the all of the best quality equipment will be used. “That’s the way Joan wanted it. She wanted it to be a world class experience, so we are doing everything we can to be true to what it is that she had envisioned for this place,” said Webster.

The center is scheduled for a grand opening on January 28, 2012. A special Christmas Day church service is being planned prior to that.

In the meantime, the center’s website will be up and running around the first of October. A description of all of the activity opportunities the center will provide will be accessible on it, as will the cost of membership.