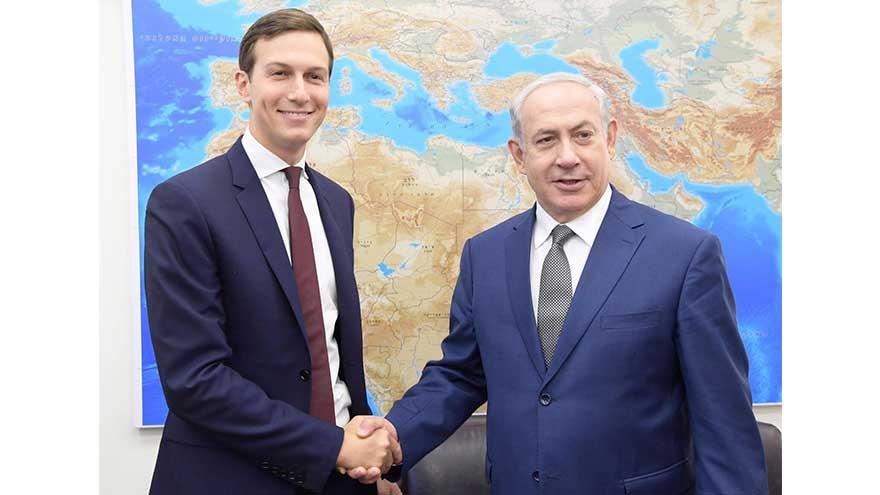 Accompanied by a high-level American delegation, Kushner reiterated Trump's commitment to finding a lasting solution to the Israeli-Palestinian conflict, which Trump has referred to as "the ultimate deal."

Netanyahu said such a deal is "within our reach," and promised to work with the Trump administration "to advance peace, stability and security in our region."

But the short readout of the introduction provided by Israel's Government Press Office lacked clear specifics or any stated goals. The White House, in pursuing a peace deal, has yet lay out a framework for negotiations following multiple meetings with Israeli and Palestinian leaders.

Before arriving in Tel Aviv, Kushner, along with a delegation that includes Special Envoy for International Negotiations Jason Greenblatt and Deputy Advisor Dina Powell, visited the leaders of Egypt, Jordan, and Saudi Arabia. If Trump wants to initiate a regional peace initiative, these three countries are critical players in the process. Kushner even met with Egyptian President Abdel Fattah al-Sisi despite the US cutting $100 million from its aid to Egypt this week.

In Tel Aviv and Ramallah, Kushner is encountering two leaders seemingly unable and unwilling to make concessions that are necessary for any real progress.

Netanyahu, under criminal investigation for bribery and breach of trust, has shifted sharply to the right to solidify support among his voter base.

In a recent speech at a rally in Tel Aviv, Netanyahu attacked the Oslo Accords, the interim Israeli-Palestinian agreement intended to facilitate a solution to end the Israeli-Palestinian conflict. He also slammed "the left and the media," accusing them of trying to carry out a government coup.

If Netanyahu wanted to make concessions to the Palestinians as part of a peace process, he would need the support of center and left parties in the Israeli parliament. Attacking those parties makes them less likely to support Netanyahu and leaves the Israeli Prime Minister with little flexibility for negotiations.

"In that situation, politically, domestically, and I would say personally, with all the problems that [Netanyahu] has back home, it's almost impossible to create new plans and new ideas," said Yoaz Hendel, chairman of the Institute for Zionist Strategies, a conservative Israeli think tank.

Palestinian leaders, who were concerned about America's inability to act as an impartial mediator in negotiations under Trump, are still waiting for the White House to openly commit to a two-state solution. Such a vision has long been the international consensus on what the future of the region should be: an Israeli state next to a Palestinian state.

But the Trump administration has refused to declare that as the goal of a peace process, eroding the willingness of Palestinian President Mahmoud Abbas to follow the White House's lead.

One day before Kushner's meetings with Netanyahu and Abbas, State Department spokeswoman Heather Nauert said, "We are not going to state what the outcome has to be. It has to be workable to both sides. And I think, really, that's the best view as to not really bias one side over the other, to make sure that they can work through it."

"If we don't know where we are heading, if we don't know what the end game is, then we are in a desert without a map," said Mohammad Shtayyeh, a senior adviser to Abbas. "We have seen it happen before. We are not going to see it happen again."

Abbas also faces internal political problems, as his Fatah party struggles with Hamas, the militant group that runs Gaza, for control and power in the Palestinian political sphere.

In his first visit to the region, Trump, together with Kushner and other members of the administration, visited the Gulf states and Israel. The trip built up Trump's credibility and goodwill with Gulf leaders, offering him leverage on the Israeli-Palestinian peace process.

"That kind of leverage has a very short shelf life if it's not used," warns Daniel Shapiro, the former US Ambassador to Israel under Barack Obama. "In the intervening months, as the political circumstances of the leaders in the region have changed and frankly deteriorated from the point of view of their flexibility, and as President Trump's own standing has taken a beating because of his domestic controversies, I believe his leverage has diminished considerably."

Nevertheless, Kushner's third official visit to the region is an indication of Trump's interest in achieving an Israeli-Palestinian peace deal. And if Trump pressures both leaders to come to the negotiating table, they may find it difficult to refuse.