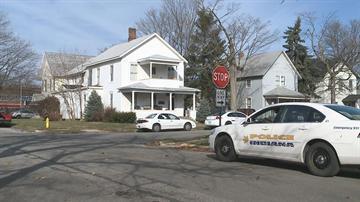 La Porte, IN. – A 2-year-old girl fell from the roof of her apartment home on the 300-block of Jefferson Avenue in La Porte Friday morning.  Emergency responders arrived at the home around 9 a.m. which was a startling sight for neighbors.

“Looked out my bathroom window and two police cars had Jefferson blocked and an ambulance, fire truck, EMS truck and a lot of confusion,” described Mike Mihalenko, who lives across the corner from the girl’s home.  “It was pretty hectic.”

The girl was taken to IU Health La Porte Hospital, officials said her injuries were not life threatening.  Mihalenko doesn’t know the family of the girl well, he said they hadn’t been living in the apartment long.  But, he had noticed the children playing from time to time.

“They have two…they’re pretty young, I know they have one real small one and then they have another one,” he explained.

Mihalenko said that he had seen the kids playing on the second floor balcony, but the parents seemed to have taken precautions.

“I’ve seen the parents, they have put a big board in blocking it,” he described.

Police said the girl might have crawled out an open window and onto the first floor roof of the two-story home and then fell.  Mihalenko, a father and grandfather, said he thinks people should think twice before placing blame on the parents.

“Little kids are pretty sneaky, you know you got to watch them all the time,” he explained.  “You just have to always watch toddlers, whether you’re a grandparent or a parent…they move fast.”

La Porte Police wouldn’t comment further on the case beyond saying that it is still under investigation.