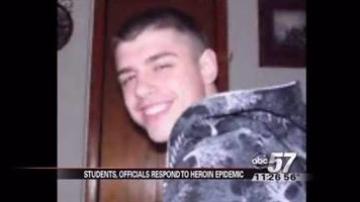 LA PORTE, IND. -- City Hall was jam-packed tonight with students, parents and police officers who met up to try and figure out what to do about the city's heroin epidemic.

The is all Cynthia Weathers has left of her 20-year-old son Corey.  He did June of last year.  This necklace is his fingerprint.

"He had gone in for the drug overdose on a tuesday..he was released on a wednesday..and thursday i got the call that he had hung himself", said Cynthia Weathers.

Weather's son had become addicted to heroin and she says it lead to his tragic death.

"It made him go crazy..he couldn't do day to day activities", said Weathers.

Weathers says she tried everything to help her son recover, but it was too late.  Once he tried the addictive substance, his life was over.  So tonight she tried to help those sho do still have a chance.  She told her story of loss to the community at the mayor's roundtable.

Mayor Blair Milo says Weather's sad story is just one of many in La Porte.

"A few weeks ago we had a student pass away from a heroin overdose", said Milo.

And just last weekend, police found two students passed out in their car with packets of heroin.  Mayor Milo says the heroin problem in La Porte is becoming worse and worse, because it is so easy to get now.

"In some cases it is cheaper than marijuana", said Milo.

So tonight she invited students and parents to share their ideas on how to curb the problem.  And the community was very receptive.  City Hall was so full, students were sitting on the floor and they had to open an overflow room for parents upstairs.

Weathers says she just hopes her story can help other teenagers in La Porte, before it is too late.