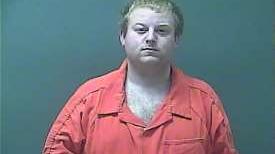 A 25-year-old man has been arrested for sexual battery on a female guest at his home. The victim told police she awoke and found the suspect on top of her.

La Porte Police responded to a home in the 600 block of Jefferson Avenue early Monday morning to investigate a disturbance coming from a bedroom.

When police went into the room, they found Noah Tamlin on top of a woman who was a house guest.

The victim told police she had taken a prescription medicine and woke up with Tamlin on top of her.

Tamlin was arrested and charged with one count of sexual battery.