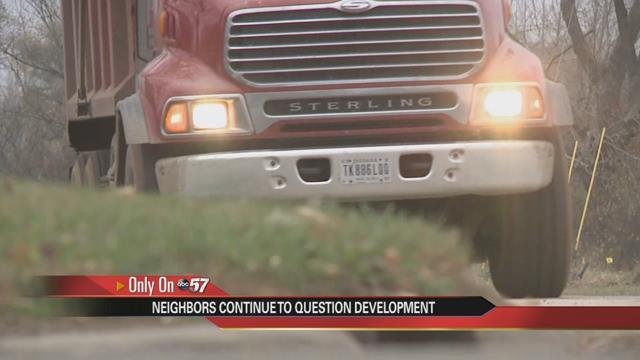 A community in La Porte continues to battle with what they call a problem neighbor. On Wednesday those who live off North 400 West and Schultz road asked the County Commission to take action against D&M Excavating.

D&M was given a permit to build a pond but months later neighbors are questioning the company’s intentions.

“I have two toddlers in my mini-van. So a mini-van versus a loaded dump trunk, it’s no question who is going to walk away there,” says Jacqueline Thomas of La Porte.

Thomas brings up a scenario that neighbors near 400 West and Schultz Road have been facing for months after D&M excavating received a permit to start building a pond in their neighborhood.

“Nobody wants to stand up and make change here and enforce some laws that really are on the books,” says Thomas.

During a La Porte County Commissioners meeting, neighbors asked why D&M Excavating has been allowed to dig sand from a residential property and sell it. They say five months after the company was approved for an improvement location permit all they see is heavy traffic and broken roads.

“We do have officers out there and if any violations are found we will take action to it,” says Ron Heeg, Deputy Chief with La Porte County Sheriff’s Department.

The sheriff’s department was also at the meeting. They say checking for weight and speed of the dump trucks leaving North 400 West has put a strain on their department.

“The guys try to get out there as much as possible but they do have other duties to do,” says Heeg.

La Porte County attorney Shaw Friedman says at this point D&M has already been given permission to dig as long as it’s for a pond.

Now it is up to them to keep their end of the bargain.

“They are going to have to demonstrate at the end of that year that there is a pond going in there and not just a sand mining operation with no hope of prospect of a pond in this site,” says Friedman.

D&M's permit is for a year so the county is saying until July of 2016 there isn't much it can do.