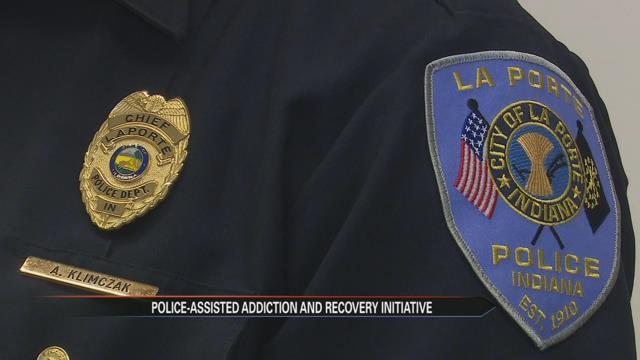 After six overdoses in La Porte last week, police are working to raise awareness about a new prevention program.

It’s called the Police Assisted Addiction and Recovery Initiative, or PAARI, and so far only three people have taken advantage of it.

Police work with volunteer ‘angels’ who act as liaisons between law enforcement and the recovering addicts.

“I was on my way to go get some fresh blueberry pie in Shipshewana and got a phone call and made a legal U- turn and came back and met this person at the police station,” said one angel, Teri Dilloway.

Now, heroin addicts can get help from the police without getting arrested.

“They can come down to the police department without fear of arrest, turn in any unused drugs that they have, and we’ll pair them with an angel who will help guide them down the path into treatment,” said La Porte City Police Chief Adam Klimczak.

“It was determined that after talking they would definitely need to go to a rehab facility after detox. Detox just wasn’t going to work, so I was given a list of places to call. I kept running into some road blocks,” said Dilloway.

“There’s a lot of different barriers to get treatment, whether it’s insurance, where they need to go, how they need to get there,” said another angel Tara Day.

So far, only three people have taken advantage of the program—half the number of people who overdosed in La Porte just last week.

“People living in that kind of lifestyle think hey if I go into the police department, hey, I’m not going to be arrested. This is too good to be true,” said Chief Klimczak.

“That’s not, not what’s going to happen,” said Dilloway.

“It does us no good to arrest an addict and throw them into jail, county jail for 30 days and have them released right back into the life they were living without any kind of treatment or long-term solution,” said Chief Klimczak.

And the addict Teri first helped has at least gotten some treatment.

“I know he’s passed the time limit that he was supposed to be there, so the only way I’m going to know is if he actually contacts the police department and lets them know,” ‘angel’ Teri said.

President Obama has even recognized the magnitude of this addiction problem. He announced Friday that September 18th to the 24th will be Prescription Opiod and Heroin Epidemic Awareness week.