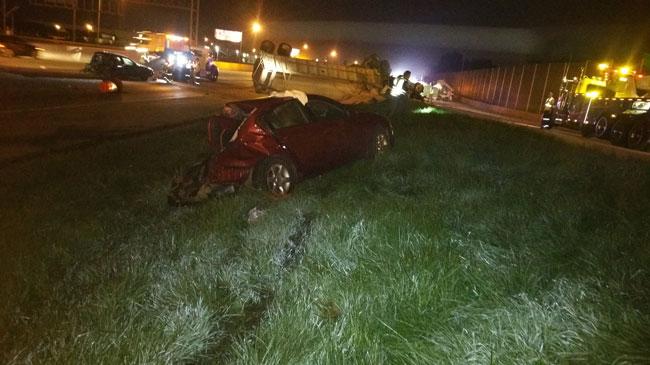 A La Porte resident died in a four vehicle accident on I-80/94 early Friday morning in Lake County.

According to Indiana State Police, Michael Northern, 53, was driving westbound on I-80/94 at the 4.6 mile marker when he failed to slow down for traffic in a construction zone.
Northern’s semi struck a Ford Taurus, then a Nissan Altima.

The Altima, then hit a Kia Rio.

After striking the Nissan, Northern’s semi went off the road and overturned in a grassy embankment, police said.

Part of his load, corn seed, was lost in that area, police said.

Northern was pronounced dead at the scene by a deputy with the Lake County Coroner’s Office.

Northern’s family has been notified. The semi was owned by Kingsbury Elevator Incorporated in Kingsbury, Indiana.

The driver of the Taurus was not injured, but his three passengers were taken to Munster Community Hospital.

The driver of the Nissan was taken to North Lake Methodist Hospital in Gary with non-life threatening injuries.

The driver of the Rio refused treatment at the scene.

The accident happened around 1:15 a.m. All lanes of the road reopened at approximately 7:10 a.m.