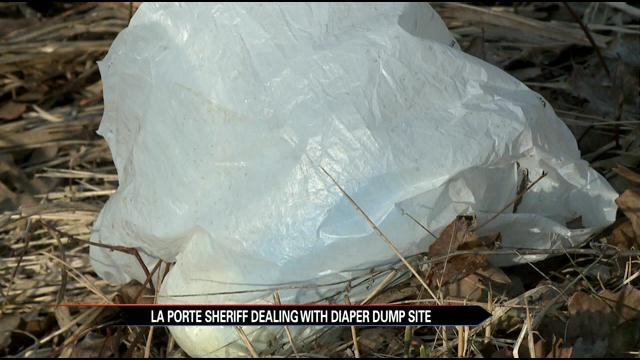 The La Porte County Sheriff's Office is in the middle of a rather odd and non-traditional case. They are investigating who is responsible for hundreds of grocery bags full of used diapers that have been dumped along county roads.

Deputies say they first noticed the grocery bags along the road back in the fall, but after the snow melted, hundreds of them appeared.

Some of them were cleaned up last week but more bags have been dumped and now the deputies are seeking answers.

“Without question, this is one of the strangest things we've had to deal with,” said Captain Mike Kellems of the La Porte County Sheriff's Office.

Kellems has seen many things in his tenure as a sheriff's deputy in La Porte County but this crime might be the most bizarre.

“This is a very strange phenomenon,” said Kellems.

A lot of bags filled with diapers have appeared on 125 East.

Littering is a crime, but Deputy Kellems is more worried about the well-being of the folks in his community.

“This is absolutely a public health concern. It's human feces littering the roadsides,” said Kellems.

These roads that normally make up a picturesque countryside.

“This area is known for its beauty in the summertime and the fall,” said Kellems.

They have now turned into someone's personal dump site.

“Obviously, it's probably somebody that's taking care of, maybe an indolent, not able to take care of the trash themselves. Unfortunately, for whatever reasons, they've decided to use our county roads as their dumping grounds,” said Kellems.

Police are now tasked with finding this diaper dumper, something they need the public's help to do.

“A lot of people think that police are out here in the shoot ‘em up, bang ‘em up pursuits, and we certainly do that, but this is the other end of the extreme. Our job takes us to all areas, when we say serve and protect, we're literally serving our community,” said Kellems.

The sheriff's office is asking for anyone with information to contact Crime Stoppers at 800-342-STOP.

Kellems says the person responsible will face a littering charge and fines from the health department.
Share this article: