La Porte woman's uncle may be the next Pope 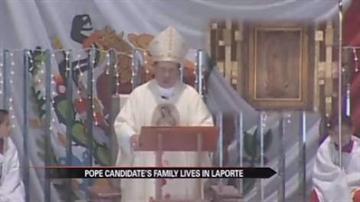 LA PORTE, Ind. -- It came as a shock to the world when the current Pope Benedict XVI announced he is stepping down. A local woman from La Porte says her uncle is a candidate to replace the current ailing Pope.

“I think for the whole world it was a big surprise. I think that no one expected this,” said Tely Rivera.

Rivera says she was just as shocked as the rest of the world to hear that Pope Benedict XVI was resigning due to his health, but not as surprised as she was to hear his replacement could be her uncle.

“I have heard that my uncle is one of the candidates up for Pope and like all of my family am honored,” said Rivera.

Norberto Rivera Carrera was sent to the seminary when he was 12 years old and now at 72 he serves as the head Cardinal in Mexico.  Tely Rivera says with the majority of the country being catholic and many countries in Latin America following suit, her uncle would represent the Catholic church well.

“With most of the people being Catholic, I think it is time for a Hispanic Pope,” said Tely Rivera.

Rivera says she always knew her uncle was special, especially when he was ordained a Cardinal in Rome fifteen years ago.

“When he became ordained by John Paul II, we got to go to the Vatican for ten days,” said Tely Rivera.

She says even though her uncle teaches the word of God to millions, she has earned the title of his little chiquita and favorite niece with her excellent Spanish cooking.

“I used to cook for him.  He loves my cooking,” said Tely Rivera.

Tely thinks her uncle is up for the job of Pope but she is leaving the decision in God’s hands.

“Of course we as a family would love him to be pope, but only God knows what is going to happen,” said Tely Rivera.