NOW: Lack of sports officials is ‘only getting worse’ for Concord High School athletics

ELKHART COUNTY, Ind.—Concord High School’s athletic teams are suffering from the lack of contest officials available for games and meets.

The school’s Athletic Director, David Preheim, first spoke out about the problem in 2017.

Now, he says, the shortage is only getting worse.

According to Preheim, student athletes’ already packed schedules are often greatly disrupted by the contest official shortages, as games and meets are rescheduled or cancelled.

Due to the lack of available contest officials, tonight’s softball games at NorthWood will now be played as follows:
4:30 PM: Varsity game
To follow: Five inning JV game

Preheim says the shortage is giving less playing time to young athletes, particularly at the JV and freshmen levels.

“It leads to fewer opportunities for our kids. Our JV kids who were expecting to play seven innings of a JV game the other night only played five innings. We hope that can get games rescheduled to a different date but if it continues the next thing that’s going to happen is games are going to get canceled all together,” Preheim said.

A problem that runs deep

A lack of sportsmanship and spectator interference is what Preheim believes is turning new and potential contest officials away from the job.

“It’s the way people treat other people. I don’t think there are many of us that would want our employers to allow people from the public to come in and treat us the way I see officials be treated,” Preheim said.

Take a look at the data below from the National Association of Sports Officials. 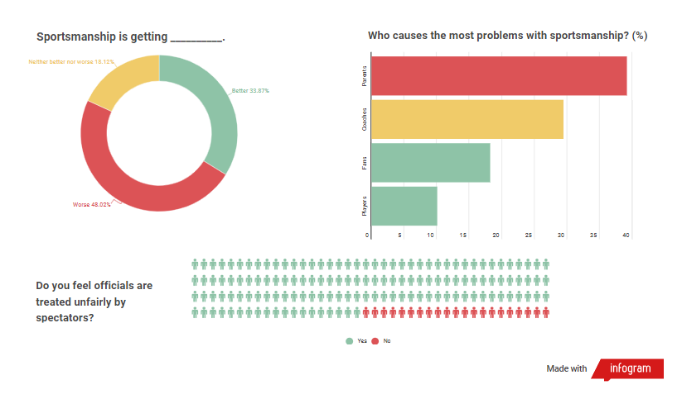 Data from the National Association of Sports Officials

Alexa Porter and Luke Shoemaker, both seniors and multi-sport athletes and Concord, hope that the treatment of professionals will change and quickly.

“I think they’re really underrated. I think coaches and players get lots of the credit but referees are doing a lot,” Shoemaker said.

“They’re just as important as all of the players, the coaches, the athletic directors. Without them we wouldn’t be able to play and they don’t get any credit or respect,” Porter said.

Both Porter and Shoemaker put an immense amount of mental preparation into getting ready for a game. They are angered that their peers doing the same are doing it all for nothing.

“It would be so devastating to know you can’t play as much or time got pushed back or moved to a different day. All of that mental preparation, it just ruins it, it’s a big obstacle,” Porter said.

“It’s extremely disappointing. I just couldn’t imagine preparing all year for a big race or a big game and then coming to an hour before the meet or game and not being able to play. That would be heartbreaking for me,” Shoemaker said.

A longtime referee hopes for change in the profession he loves

IHSAA contest official Jimmy Arnett says his favorite part about the job is the relationships he builds throughout the state with teams, coaches, players, and families.

Arnett has been officiating basketball and baseball for the past 28 seasons across the state of Indiana.

He says social media has started to play a major role in the mistreatment of contest officials.

“In today’s society, we have the proliferation of social media so many people, myself included, have been targeted on social media for someone’s unhappiness with the outcome of a game,” Arnett said.

Hear directly from Arnett about the words he receives while working. (Story continues below the video)

IHSAA seeing a decline across the state

IHSAA data shows that the number of contest officials across the state is declining across all sports except for swimming.

The state has lost nearly 300 officials over the last three years.

IHSAA Assistant Commissioner Sandra Walter says the number one reason for the decline is in fact the treatment of officials by spectators.

"It’s very difficult to take a young official and put them in that situation when they’re worried about making the right call and being in the right position and they’ve worked on their mechanics and then all they receive is the grief from the crowd. It's unnerving for them and it's honestly to the point where is it worth it," Walter said.

IHSA even runs a mentor-ship program for new officials. Novices are paired up with seasoned, state level officials who prepare them for what to expect during the job.