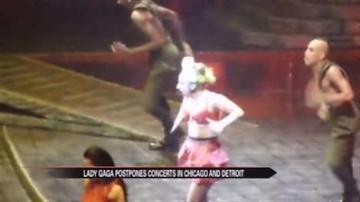 Thousands of fans are disappointed in the postponing of Lady Gaga's concert in Chicago because of injuries.

The pop super-star burst onto the scene with the hit "Just Dance" but now those moves have done harm to her body.

The 26-year-old has been diagnosed with an "inflammation of the joints" and had to postpone her concert in Chicago as well as the Detroit and Hamilton venues.

"Synovitis is an inflammation of the membrane that lines a joint capsule. It can cause
significant pain, significant swelling, reduced range of motion," said Dr. Jennifer Ashton, ABC News Medical Contributor.

Gaga says she did not want to disappoint her fans so she pushed through the pain as long as she could but she said after last night's performance, she could not walk.

Her concert in Philadelphia next week is still on.