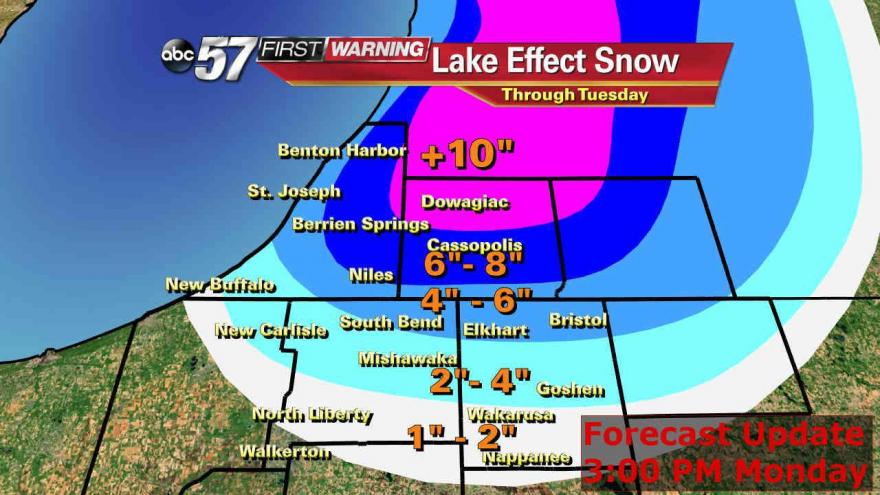 Get the latest 10 Day Forecast here

3:00 PM: Forecast performance was good. Cass county was under the bulls-eye with 8"-12" measured from Niles to Cassopolis. And 4"-6" along the state line. Would analyze this more but no time as MORE snow is on the way Wednesday into Thursday.

10:30 AM 11/18: Snow tapered off early this morning in far Northern Indiana, but lake effect snow will continue for Southern Michigan into the afternoon. Driving is still dangerous in many parts of Southern Michigan, and roadways in Indiana that have been impacted by last night's lake effect must be approached with caution. Snowfall at ABC57 reached 5.33" between 10AM of yesterday and 10AM today. As other reports and snowfall totals become available we will continue to post updates. stay tuned! - Greg

12:00 AM 11/18: Snow continues to fall across southwest lower Michigan and extreme northern Indiana. A large bulls-eye of 8" centered over Cass ( Fig 5) shows the hardest hit area. These are a mix of radar estimates and reports as of Midnight. Snow continues to fall and and there will be areas topping one foot of snow in Cass county Michigan. Blowing and driving snow also continues to be a problem even in areas seeing only a few inches. Expect hazardous round across all of southwest Michigan and extreme northern Indiana north of US-20. This trend looks to continue through the morning Tuesday, slow improvement by afternoon. Latest forecast (Fig 1) seems accurate to possibly under estimated in the bulls-eye as totals approach 1 foot.

3:00 PM Update 11/17: Minor tweaks to the forecast map building on early data from gusty wind (Fig 1). Heaviest snow looking to set-up across northern and central Berrien and Cass Co with the potential for +10". Most of southwest Michigan will see 6"-8". How much snow crosses the state line is still the big question, Granger to Simonton make see the most snow in Indiana.

10:00 AM Update 11/17: Light to moderate snowfall has setup across St. Joseph and Elkhart County in Indiana, as well as Eastern Berrien, Cass and St. Joseph County Michigan. Previous snowfall forecast still looks good heading into the afternoon, but if wind speeds slightly exceed forecast strength, the heaviest totals could shift slight further inland. A Winter storm warning kicks in at 1PM this afternoon for Berrien, Cass and St. Joseph County Michigan that will last through 7PM Tuesday. As wind direction changes out from out of the northwest to out of the immediate west, focus will quickly shift to Southern Michigan. - Greg

4:00 PM Sunday 11/16 -- Another burst of arctic air moving across Lake Michigan will turn on the lake effect snow machine once again. There are some differences to this set-up, but up to a foot of snow is possible where the heaviest bands set-up. In classic lake effect nature, there will be sharp dividing lines between higher and lesser amounts of snow.

Set-Up:  An arctic cold front sweeps through Michiana Monday morning. Temperatures fall and the wind shifts to the northwest ( Fig 1) As always with lake effect snow, wind direction is key for where the heaviest snow bands will set-up. A west to west-northwest wind highly favors southwest Michigan, and favors less of northern Indiana.

Berrien and Cass counties will see the brunt of the lake effect snow. That is why a winter storm watch was issued ahead of this round of snow, for the potential of +6" of snow (Fig2).

Forecast: Having seen the potential from the first round of lake effect snow this season. The potential is there for some areas to see up to a foot of snow. With a west-northwest wind areas along the state line could still see impacts of Lake Effect snow especially as far south as the Toll road to US-20. There's a very sharp ramp of of snow totals north of the state line. The "loading" zone for lake effect along the lake-shore will see slightly less where inland there's the potential for +10" of snow, however the 6"-8" range is most likely. Western Michigan, from Van Buren county north will likely see the highest amounts of snowfall.