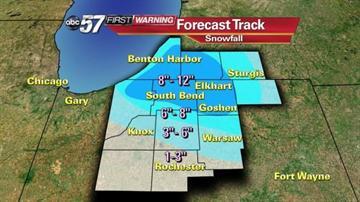 Most people in Michiana hear the phrase "lake effect" and know exactly what to expect.  But, when we say "lake enhancement" people begin to freak out.  It is really nothing new, just a slightly different set-up.

We will start with lake effect.  This term is synonymous for "someone is getting some heavy snow!"  it does not just refer to snow, but most of the time, that is what most people care about.  We rarely are concerned with lake effect rain showers, but they do exist.

The main principle behind this weather is the temperature difference between the lake and the air.  With lake effect snow, cold air blows over the warmer lake and the snow develops thanks to the moisture from the lake.  We discuss the wind a lot, and are constantly talking about the wind direction having a lot to do with the amount of snow, and area seeing the heaviest of the snow.  A slight variation in the winds could mean one neighborhood sees 3" of snow and another neighborhood just up the street could receive 8".  But, most of the time, we are talking about the heaviest snow falling in the areas closest to the lake.

Lake enhancement is slightly different.  Instead of having just the snow (or rain) because of the wind and temperature difference between the water and air, we also have another factor.  This "extra" feature is a storm.  So, we have a storm causing some snow, and then we have the temperature difference between the lake and the air.  These are combined, and the lake effect "enhances" the storm and adds extra moisture (meaning more snow!) to the total.

Last week we saw a lake effect snow event.  Areas near the lake, and downwind received the heaviest amounts of snow.  Areas further south saw a few inches, at most.

The impending storm will be lake enhanced.  If you remember, over the weekend we were discussing the potential for some heavy snow, mainly in the lake effected areas.  But, now, since we are watching a stronger storm develop, this storm will bring snow to all of Michiana, with the heaviest amounts closer to the lake thanks to the "lake enhancement" meaning we will see "lake effect" along with the snow the whole area is getting from the low pressure system.

Please be careful on the roads!  I know we all sound like a broken record reminding people to be safe all the time, but slick roads, snow packed intersections, near white out driving conditions are dangerous, even for experienced drivers!