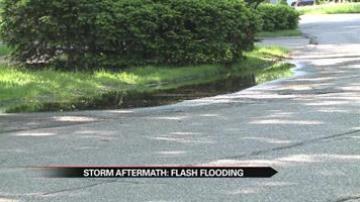 MICHIGAN CITY, Ind. -- Residents by Lake Henry are angry. Since February, their homes and lawns around the lake have been drenched in water. They believe it's because the lake has been neglected for years and they said the city won't help them.

Michigan City Mayor Ron Meer says it's not up to the city to provide financial help but residents disagree. They say if they can't get the money, they want the lake fixed.

The grass on John Dull's backyard is noticeably wet.

"It's been flooded ever since the end of February," said Dull.

For 3 months, he along with his neighbors have been dealing with flooded yards and basements. They say Lake Henry is to blame.

“We want to have the lake lowered and we want to get something done and we think we should have been given some sort of compensation for the trouble they caused us,” said Dull.

Steward wants compensation for what he believes the high water has destroyed - valuables, furniture, and even his wife's health.

“I have a wife with allergies and I know this is causing them. She had a reaction to this and had to go to the hospital," said Steward.

Normally, these residents could file an insurance claim, but not in this case. That's because it's not proven all of the water has been caused by lake.

Michigan City Mayor Ron Meer agrees with those insurance companies. He says the lake is not to blame.

“We’re not positive it’s a contributing factor because it’s never flooded the streets or flooded the yards or things of that nature," said Meer.

That doesn't mean the city isn't trying to fix the problem. In fact, Meer says they're working very hard to get the lake lowered.

“I want them to know we’re doing everything we can," said Meer.

“I’ve been to two council meetings and they’ve both been a nice big joke," said Dull.