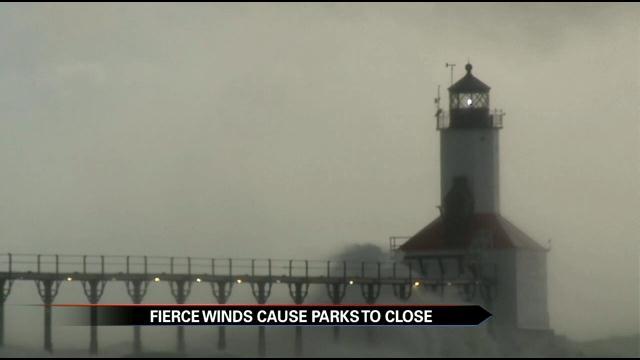 Lake Michigan saw waves that some said were the biggest they have ever seen.

Police blocked off the beach in Washington Park in Michigan City for safety concerns after a lifeguard stand toppled over and rolled several times. A paramedic who has been working in the Michigan City area for twenty-three years said Friday's waves were the biggest he has seen and the winds were the fiercest he has seen, too.

“Nothing like I've ever seen before. It's got to be like hurricane force winds,” said Teri Kauffman. She went to Washington Park to see Mother Nature at work, whipping up walls of water. “We came from Elkhart to see the great big waves of Lake Michigan.”

They got what they were hoping for, a showcase of wild wind, waves and blowing sand. Police quickly took away their front-row seats after the gusts gripped a lifeguard stand.

“Blown over the building over there, the lifeguard stand and now they're not letting us on the beach because they're afraid it'll break apart,” said Kauffman.

After canceling trick-or-treating plans, Amber Hanell said she and her son came to the beach looking for an eerie sight. “It's so windy, like a tornado,” said her son, Ty Williams.

These speculators got an eye full. At times the sand was blinding and the sleet felt like bullets and Kauffman said the winter-like weather took no time getting started. “It came fast and it came furious. I hope this isn't an indication of what our winter will be.”
Share this article: