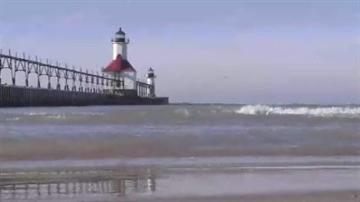 ST. JOSEPH, Mich. -- The commercial shipping industry is fighting to stay alive as Lake Michigan continues to drop to record lows. A local company had to spend tens of thousands of dollars of its own money to dredge a federally operated harbor.

Water levels in Lake Michigan are dropping so fast, the commercial shipping industry says it can’t keep up.

At LaFarge in St. Joe, Michigan, high winds are shifting sand into the harbor to the point where cement has to be transported by trucks.

That's proving to be costly.

Lenardson says he's seen a few more grounded boats this season, but he's hurting overall because fewer people are out on the water.

"Same case down in Indiana, the whole lake is shallow. With the water being lower than normal, one good storm could blow the piers and the ports shut,” said Lenardson.

Leaving companies like LaFarge waiting and hoping for government intervention.

"The way the situation is right now, the St. Joseph Harbor is completely useless,” said LaValley.

The Army Corps of Engineers hopes to dredge early this spring if Congress will provide the funding.