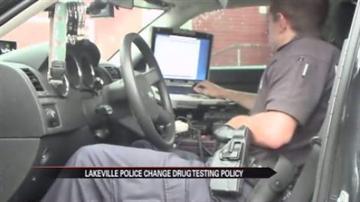 LAKEVILLE, In.-- After a reserve officer's fatal crash last week, his toxicology report tested positive for alcohol, cocaine, and marijuana.

Now Lakeville Police are enacting a new drug policy for their department.

When Danny Cox's toxicology results came in, the Chief of Police said he was shocked and dismayed.

All the officers involved with the Lakeville Police Department were required to get drug tested immediately.

Patrick Howard said, “We have now instituted random drug testing for all of our officers. In fact immediately after I got the news, that we were extremely shocked about, all of my officers were made to go down and take drug tests.”

He said he needed reassurance that no other officer was on the wrong side of the law.

The community was stunned by Cox's loss and the toxicology results.

Howard said, “I tried to do the best to restore faith in the community in the officers that we have. We had all clean results from our officers.”

He says whoever wears the Lakeville badge takes on a code of conduct, and illegal drugs will not be permitted.

Cox's death is an unfortunate reminer that these random drug tests are necessary because Cox never showed a single sign that he may be taking drugs.

Howard said, “Every time I ever saw Danny or talked to him he was always completely normal. Never noticed him being under the influence of anything whatsoever.”

This new drug policy is already in effect. Officers could even be called for testing when off duty.