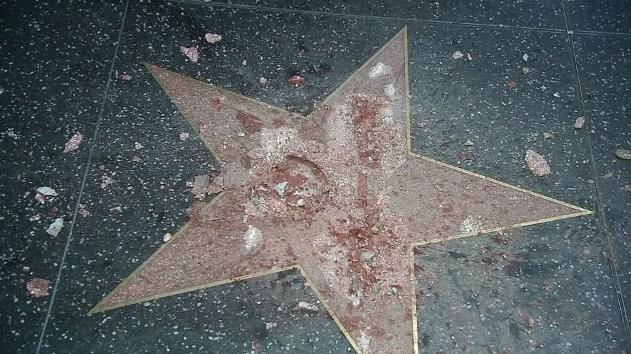 (CNN) -- Los Angeles police are looking for the man who destroyed Donald Trump's Hollywood Walk of Fame star with a sledgehammer and a pick ax.

Police tweeted Wednesday that they're seeking the public's help in identifying the vandalism suspect.

The man identified himself as James Otis, an heir to the Otis family's elevator fortune, in an interview with CNN on the Walk of Fame Wednesday morning. He said he was doing it to help the 11 women who have accused Trump of sexually assaulting them, and other victims who he said could come forward in the future.

"I had four or five family members sexually assaulted, and I'm terribly upset that we have a presidential nominee who's become sort of a poster child of sexual violence," Otis said.

CNN has reached out to the Trump campaign for comment and not yet gotten a response.

Otis managed to remove the gold emblem from the middle of the star and damage the star itself and the area around it. The shape of the star was still recognizable after Otis had vandalized it.

Leron Gubler, President/CEO of the Hollywood Chamber of Commerce, said work to repair the star will happen immediately but the star is expected to remain covered for several days.

Gubler said the Chamber is working with the police and intends to prosecute to the full extent of the law.

"When people are unhappy with one of our honorees, we would hope that they would project their anger in more positive ways than to vandalize a California State landmark," Gubler said.

Otis said he plans to sell parts of Trump's star and donate the proceeds "to the women who have been sexually assaulted by Mr. Trump."

"I know I can sell it. I think I can get over $1 million for this star, to be distributed to these women and many others that will be going forward," he said.

Otis noted he previously auctioned off personal items belonging to Mahatma Gandhi, saying he "donated all the money to countries that were fighting dictatorships with non-violent strategies."

That 2009 auction of Ghandi's possessions attracted news coverage at the time, including by CNN, and Gandhi's items were sold for $1.8 million.

Otis said he knows he might be arrested -- though he doesn't want that to happen.