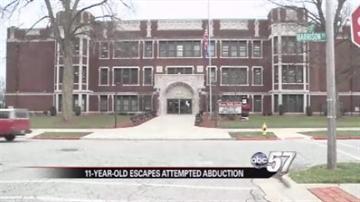 LAPORTE, Ind. -- An 11-year-old LaPorte boy named David Keaton says someone attempted to abduct him Friday morning as he walked down to the end of the street to catch his school bus. Now the LaPorte City Police Department is beefing up patrols near school bus stops before and after school to try to keep it from happening again.

Gary Hostetler is the only homeowner on L Street that has pine trees lining the roadway.

"By the pine trees that's the only thing we can figure out,” said Hostetler who was puzzled if the attempted abduction actually happened in front of his home.

According to police, the student was walking down L street to catch his school bus around 7:15 a.m. Friday when someone tried to abduct him near Hostetler’s pine trees.

"My dog was out and he started carrying on but at the time I didn't know what was going on until after the neighbor told me about it later,” said Hostetler.

"A white van, a full sized van, came up behind him. As he turned to look, the subject was leaning out the van partially from the sliding door reaching out to grab him,” said Captain Tom Thate who is in charge of the Detective Bureau for the LaPorte City Police Department.

He said they don’t have a lot of information to go on.

Keaton and his father spoke to ABC 57 and showed us where the attempted abduction happened on L Street and it was in fact right outside Hostetler's house.

Keaton said, "I was heading to my bus stop at the end of the road down there and I looked behind me and I saw a white van coming close to me."

Dr. Glade Montgomery, the Superintendent with LaPorte Community School Corporation says it is still waiting to hear all the facts from police about the incident so they can notify parents!

"It was just a preliminary report that we received Friday and in an effort to not give misinformation to parents we have not sent anything home yet,” said Dr. Montgomery.

About 8 miles away in the New Prairie United School Corporation the LaPorte County Sheriff's Department is investigating two separate incidents involving students who claim they were followed after getting off of the school bus on their way home from school.

Jim Dermody, the Superintendent at New Prairie United School Corporation sent a letter home to parents dated Dec. 13, after two of their middle school students were approached by motorists as they were getting off their buses in separate incidents.

Police don’t believe these three cases are related, but are still looking into the possibility.

Both school districts are asking the public, parents and schools to be more vigilant after these incidents.

If you have any information on any of these cases, call Crime Stoppers at (574) 288-STOP.