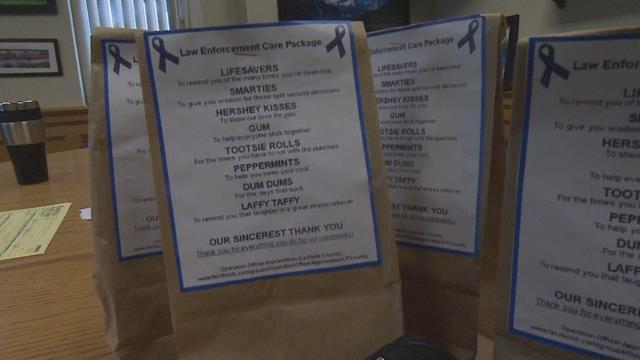 One LaPorte resident went above and beyond for LaPorte County police after she delivered hundreds of goodie bags to every officer, including their K-9 companions.

“The only thing I can say is overwhelming,” said Captain Mike Kellems from the LaPorte County Sheriff’s Department.

Debbie Stantz, along with her daughters and grandchild, are the ones behind the project.

“We wanted to do this to show support for our local police officers with you know all the police shootings and killings that have been going on,” said Stantz.

Her and her family stuffed two-hundred and nineteen bags full of different candies, and each one of them had a special meaning.

“Tootsie rolls, you know smarties, to help keep you smart. Everything that’s on there’s got an explanation including dum dum suckers for the days that suck, I thought that was fantastic,” said Captain Kellems.

Debbie says doesn’t want to stop here. She wants to continue making their day, but with some more help.

“We could do bigger and better things if more of the community would get involved and if everybody just gave a little something, it just makes it so much easier on everybody else,” said Stantz.

She didn’t receive any donations for the project. In fact, she bought all of the candy and bags herself. She hopes to start planning her next act of kindness very soon.