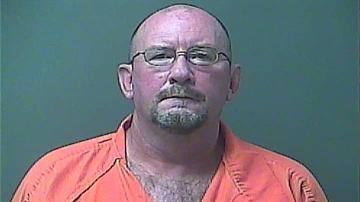 LAPORTE, Ind. -- The LaPorte County Sheriff's Office is searching for a man who had what police say appeared to be homemade explosive devices in his home.

At 9 p.m. Monday, the sheriff's office was called to a home in the 7200 west block of County Road 125 North for a domestic disturbance.

When detectives arrived, they found what they believed to be homemade explosive devices.

They obtained a search warrant and the Emergency Response Team entered the home. The male, 54-year-old Robert L. Ofcky, was no longer in the home.

An arrest warrant has been issued for Ofcky for possession of an explosive device.

Ofcky is a white male who is 6'3" tall, 265 pounds, brown hair and green eyes. He may be wearing eyeglasses and may have a goatee. He has the name NANCY tattooed on his left fingers just below the knuckles.

Investigators remained at the home until 5:30 p.m. Monday clearing the home of any potential explosives.

Police believe he may be driving a gold Ford pickup truck.