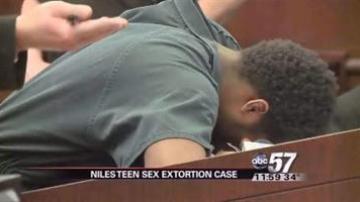 The Niles teen cried as he was sentenced Monday morning in court.

He plead guilty last month for his role in plotting to force a girl into having sex by threatening to post a sex tape of her onto Facebook.

During the court process, Miller claimed that he was innocent, and demanded a speedy trial.

He later took a plea deal and plead guilty to attempted assault and battery.