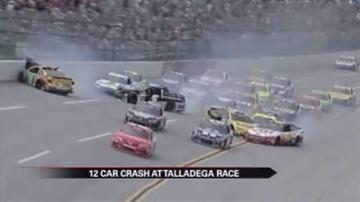 TALLADEGA, Ala. — A major crash happened at Talladega.

The wreck happened during lap 44 as Kyle Busch tried to change lanes.

Brian Vickers, Tony Stewart, Greg Biffle and numerous other drivers were all affected.

At least 16 cars in total were affected by the wreck.

Kasey Kahne crossed the finish line first, but Regen Smith was in the lead of the final lap.

The late pileup caused some chaos in determining who won the race. Smith was declared the winner.