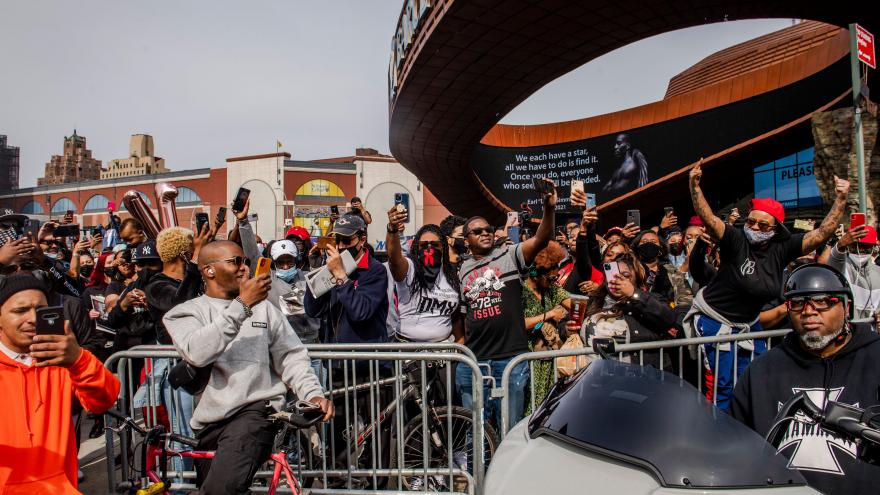 (CNN) -- The late rapper DMX was honored at a "Celebration of Life Memorial" in Brooklyn on Saturday in a tribute attended by his fiancée, children and his Ruff Ryders Entertainment collaborators.

Fans lined the streets as the red casket carrying DMX, born Earl Simmons, was carried atop a monster truck with the words "Long Live DMX" painted on the side. The monster truck played DMX songs and followed a procession dubbed "The Ruff Ryders 2 The Rescue: Ryde 4 Life" that started in Yonkers and made its way to the Barclays Center arena in Brooklyn.

DMX, 50, died on April 9 after a heart attack that left him on life support for days.

The memorial, which was broadcast online and attended by only family and close friends due to coronavirus pandemic restrictions, started shortly after 6 p.m. Once the ceremony began, DMX's fiancée, Desiree Lindstrom, and his 15 children joined the red casket on stage and spoke of the late rapper's love of Jesus and his fans.

"Today is very hard for me and my family...but one thing that is keeping me going is knowing that my son and I just gained an amazing angel, my fiancé and Exodus father...Earl Simmons..! I will forever love you and you will always be in my heart!," Lindstrom wrote in a tribute to her fiancé on Instagram.

One of his older sons read a eulogy through tears, and one of his young daughters performed a rap she wrote for the occasion. Another young son read a poem remembering DMX as "the best father anybody could ask for."

DMX's daughter Sonovah Junior performed an original rap in a tribute to her father.

"He taught me to be strong, but it's OK to be afraid, 'cause sometimes it'll show you how to be brave," Junior rapped. "My brothers and sisters, we all stand together, throw up the X, daddy forever."

Rapper and actor Nas paid his respects on stage in a moving tribute to DMX.

"We did a great movie together. And on that movie, he was just rising up as a star. His first album didn't even come out yet, but he knew his journey was starting," Nas said. "We stood outside the Tunnel Night Club about to shoot a scene, and he looked at me, and tears in his eyes, because he knew about the journey he was about to embark on in becoming a hip-hop icon."

Members of the Ruff Ryders Entertainment collective, of which DMX was a part, followed Nas onstage. Speakers included rappers Eve, Swiss Beats and Jadakiss, who said he "wouldn't be sh*t without (DMX)."