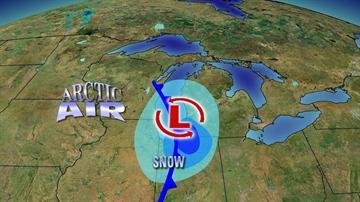 There have been rather large changes in model runs in just 24 hours. Most of this week, up until last night had the arctic air arriving and brining bands of lake effect snow to primarily extreme northern Indiana and southwest and lower Michigan. That cold air is still going to arrive however with on key change.

Instead of being standard lake effect, where snow is dirven primarily by the cold air moving over a warmer lake Michigan, directed by the wind. We now have cyclogenisis over the lake, in other words a low pressure system forms. ( See image above).

This changes us from lake effect to lake enhanced, which brings a larger area into seeing snow ( note chicago and NW Indiana) as well as adding to overall snowfall potencial to the area. Along with stronger winds that will cause blowing and drifting snow.

In summary we went from a weaker to slightly similar snow event to what we saw last week, to now a more significant snow and wind-maker. Snow totals instead of ranging mostly 6"-8" with areas upto 12" in the hardest hit spots will now see 8"-12" with areas of +12" (plus blowing and drifting).

Be prepared for tough travel for the drive home Thursday through most of Friday. We'll be here to track it for you.