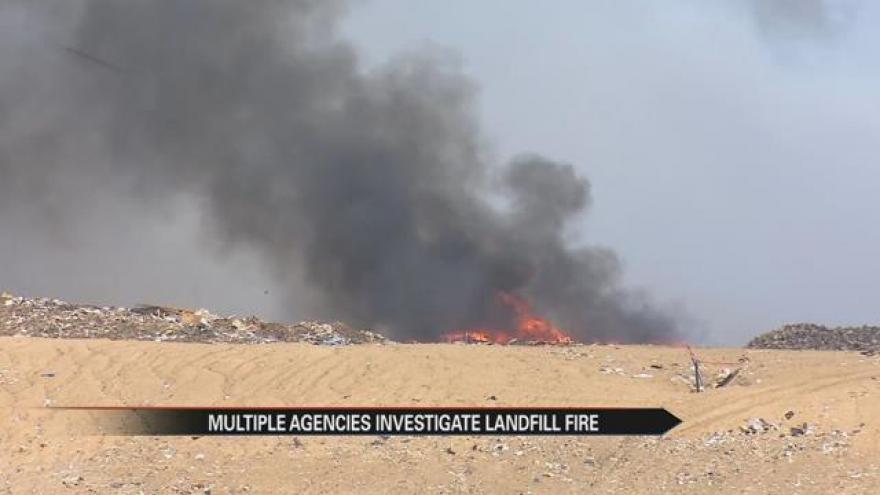 Plumes and plumes of smoke are still in the air after a major landfill in Elkhart County caught fire.

As of now the cause remains unknown. Concord Fire Department and the Indiana Department of Environmental Management were the first to respond to this fire at Waste Management’s Earth Mover’s Site.

The cause remains unknown. “Trying to find out source of fire at this point it’s kind of hard to determine that. It was pretty large but contained in that area,” says Captain Bradberry.

Captain Bradberry says crews are spraying water and moving dirt onto the extinguished areas, right now there is no safety concern.

“We do know that the site does not accept hazardous materials so we’re not too worried about chemicals being in the airways,” he said.

And even though air contamination isn’t a huge concern, the EPA, IDEM and Waste Management are on scene along with the Elkhart County Emergency Management. Bradberry even put in a call to the National Weather Service.

“National Weather Service has been contacted to look at possible lightning strikes sometime early this morning to see if that may have any chance of sparking the fire,” says Bradberry.

According to Bradberry there is no estimated time of when the fire will be completely put out, but all crews are prepared.

“We have all the pieces in place so that if this were to turn for the worse we have those told in place.”

Bradberry says right now his main concern is safety and putting the fire out.

“At this point it’s just a matter of addressing the fire itself and containing that. Everything to the West, Northwestern of this area up to Bristol Street we’re asking people to shelter in place,” says Bradberry.