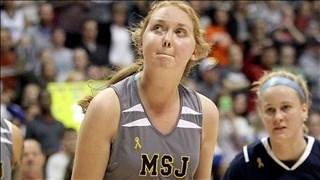 Lauren Hill, who took her inspirational fight against brain cancer onto the basketball court and into the hearts of many, has died at age 19.

The Indiana woman's story became known around the world last year when she was able to realize her dream of playing college basketball. Mount St. Joseph University in Cincinnati successfully petitioned the NCAA to move up the opening game of its schedule to accommodate her desire to play.

At a ceremony honoring her life on the school's campus Friday afternoon, head coach Dan Benjamin said the toughest thing a coach has to deal with is a loss.

The community had lost more than a player, he said. It lost a friend and a daughter. And it lost "an unselfish angel."

"It's not often you get to celebrate a loss," he told the crowd as he struggled to hold in his tears. "But today we celebrate a victory on how to live a life, through Lauren Hill. (No.) 22 you will be missed and remembered by so many."

An assistant coach read a quote from Hill:

"I encourage everyone to cherish every moment with no worry about the past or anxiety about the future. Because the next moment is never promised. Never leave anything unsaid. I have learned to see the blessings in every moment and through every struggle, no matter how tough it might be. Nothing holds me back from living my life and chasing my dreams. I always finish what I start and see it through to the end. Never give up on your dreams. Find something to fight for; I fight for others."

Hill would go on to help raise $1.4 million for pediatric cancer research with the nonprofit group The Cure Starts Now.

The organization called her a "worldwide inspiration."

"Lauren captured the hearts of people worldwide with her tenacity and determination to play in her first collegiate basketball game with her Mount St. Joseph University team," the group said on Facebook.

"We are forever grateful to have had Lauren grace our campus with her smile and determined spirit," Artez said in a statement. "She has left a powerful legacy. She taught us that every day is a blessing, every moment a gift."

"Lauren's message was constantly positive," he told CNN. "We all need to work together to beat obstacles. Not just cancer. In any situation we can be positive."

As news of her death spread, social media lit up with messages honoring her life.

"The greatest accomplishment we can achieve as humans is to inspire many," Twitter user Just_AP wrote. "Lauren Hill did that."

NCAA President Mark Emmert said Hill's "enthusiasm and strength were an inspiration not only to those who knew her best, but also to the millions of people she touched around the world by sharing her story."

"Lauren achieved a lasting and meaningful legacy, and her beautiful spirit will continue to live on," he said in a statement.

Hill was diagnosed with diffuse intrinsic pontine glioma in 2013 when she was a senior in high school. The rare brain tumor was inoperable, but Hill persisted in playing on her high school team despite chemotherapy treatments.

"I never gave up for a second, even when I got a terminal diagnosis, never thought about sitting back and not living life anymore," she told CNN affiliate WKRC-TV at the time.

She had already committed to play for Mount St. Joseph when she was diagnosed. In October, the school received permission from the NCAA to move up its first scheduled game so Hill could play.

In front of a sellout crowd, many wearing T-shirts bearing her name and slogan, "Never Give Up," watched the ballplayer score the first two points and the final layup of the game.

"Today has been the best day I've ever had," Hill told the crowd after the game. "I don't know what to say but thank you."