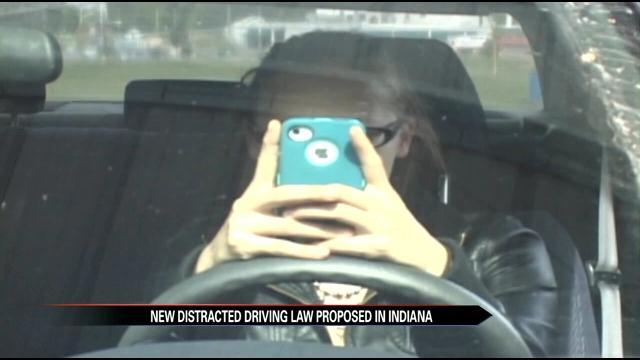 Indiana lawmakers want to put an end to distracted driving.

A new bill could outlaw using a phone while driving – unless the driver is using a hands free device.

“It's unsafe. It really is. And I think about I got a grand baby here. I wouldn't want somebody running over her here because you're talking on the telephone,” Patricia Davis explained.

Distracted driving. We've all seen it.

That person who keeps looking down as he or she drives, one hand on the steering wheel the other using their smart phone.

Police said the problem is growing across Indiana and the entire country.

“We sense and we know that there's a lot of distracted driving occurring,” Trent said.

Currently, under Indiana law it is only illegal to text and drive.

“That's another tough thing to try to enforce. Because it's so difficult to be so invasive to look in someone's car,” said Trent.

Talking on the phone, using GPS, and even sending emails while driving are not against the law --at least not yet.

This year Senator Pete Miller introduced a new bill to outlaw the use of all hand held devices while driving.

He argues distracted driving can be as simple as placing a phone call.

If passed, police said the law would make their job easier.

If someone is driving with a phone in their hand, it would be illegal no questions asked.

“Yeah it would certainly cut down on the guessing we have to do. It would take all of the guess work out of it for law enforcement,” Trent explained.

But some drivers think the law goes too far and punishes those who can responsibly use their hand held phone.

“Texting I could see being an issue. But talking on your phone or using your GPS not so much,” Harrison Glon said.

Others think this law could make the roads a safer place.

The law would make an exception for 9-1-1 calls.

There is no set date on when lawmakers will vote on the bill.
Share this article: