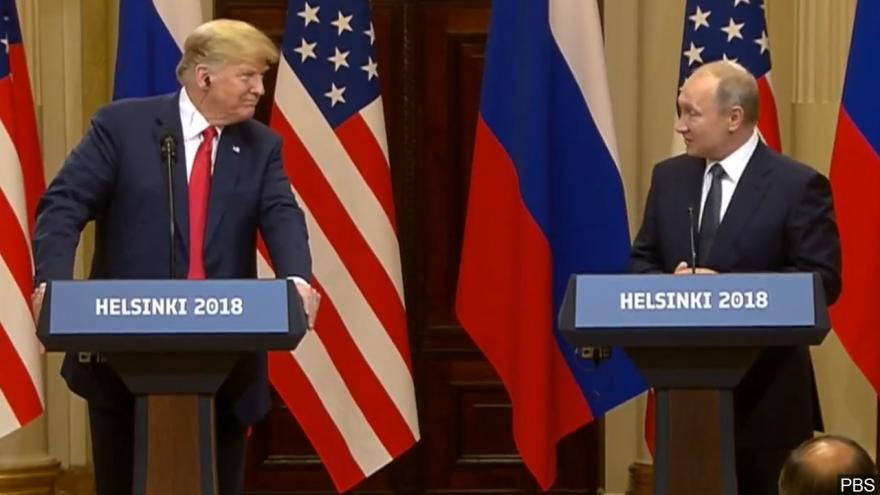 WASHINGTON (AP) — Key members of Congress, including some Republicans, are criticizing President Donald Trump's performance at a press conference with Russian President Vladimir Putin as "bizarre," ''shameful" and a "missed opportunity" to stand up to Russia.

"The president must appreciate that Russia is not our ally," Ryan said, in what was, for the mild-mannered speaker, akin to a reprimand. Ryan said Russia "remains hostile to our most basic values and ideals."

"I never thought I would see the day when our American President would stand on the stage with the Russian President and place blame on the United States for Russian aggression," tweeted Sen. Jeff Flake, R-Ariz. "This is shameful."

Sen. Ben Sasse, R-Neb., called it "bizarre" and "flat-out wrong" for Trump to suggest that both the U.S. and Russia are to blame for the deteriorated state of the two countries' relationship.

Graham quipped that Trump ought to check a soccer ball Putin gave to Trump for listening devices, "and never allow it in the White House."

The Republican rebuke from Capitol Hill came largely from those lawmakers who have been willing to openly criticize the president. But key Republicans, Democrats and others in Washington appeared stunned that Trump refused to publicly condemn Russian interference in the 2016 election or warn against future meddling during the joint press conference with Putin in Finland.

Trump appeared to take the Russian president's denial of interference at face value while calling the U.S.'s own Justice Department special counsel's probe as a "disaster." That U.S. investigation, led by special counsel Robert Mueller, unveiled an indictment Friday against 12 Russian intelligence officers accused of hacking Democratic emails during the 2016 campaign.

At the joint appearance in Finland with Putin, Trump repeated the Russian leader's denials about involvement in the election.

"He just said it's not Russia," Trump said of Putin. "I will say this: I don't see any reason why it would be."

Former intelligence chiefs who served under President Barack Obama were scathing in their criticism of his remarks. John Brennan, who served as CIA director between 2013 and January 2017, called the president's comments "treasonous."

"Donald Trump's press conference performance in Helsinki rises to & exceeds the threshold of 'high crimes & misdemeanors.' It was nothing short of treasonous. Not only were Trump's comments imbecilic, he is wholly in the pocket of Putin. Republican Patriots: Where are you???" Brennan tweeted.

James Clapper, who was director of national intelligence under Obama between 2010 and 2017, described Trump remarks as "truly unbelievable."

"On the world stage in front of the entire globe the president of the United States essentially capitulated and seems intimidated by Vladimir Putin," Clapper told CNN.  "It was amazing and very, very disturbing."

Clapper described Putin as an "arch enemy of the United States" who seeks to undermine its democracy and elections. "He has got to be celebrating on the way home to Moscow."

Democrats sounded similar alarm. Sen. Mark Warner of Virginia, the ranking Democrat on the Senate Intelligence Committee, tweeted, "For the President to side with Putin over his own intelligence officials and blame the United States for Russia's attack on our democracy is a complete disgrace."

Sen. Chuck Schumer, D-N.Y., the minority leader, says never in the history of the country has a president supported an American adversary the way Trump supported Putin. "For the president of the United States to side with President Putin against American law enforcement, American defense officials, and American intelligence agencies is thoughtless, dangerous, and weak."

Yet while Trump's remarks drew criticism in both parties, the reaction was more muted from the Republican side. Key GOP lawmakers at least initially refrained from directly attacking Trump's performance, and at least one echoed the president's criticism of the special counsel probe.

Rep. Darrell Issa of California he takes the charges filed by Mueller's team seriously, but added, "I personally would neither rule in nor rule out the validity of a very interesting and odd-timed indictment of people who can never be brought to justice."