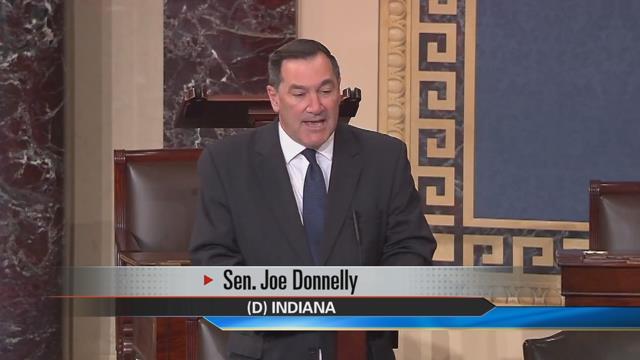 The Federal Water Quality Protection Act that was crafted to protect millions of acres of wetlands, streams and river from water pollution remains intact for now.

But some lawmakers, including a few from Indiana say the moves go too far.

His message was everyone wants clean water but the current rules in place to get are not working.

“It’s the concept our country has been built on. The legislation is simple, focus on common sense principles, shape a final rule, that requires straightforward procedures that the EPA skipped the first time,” said Senator Donnelly.

It’s the bill he helped author and it received strong bipartisan support on Tuesday but came 3 votes shy of the 60 vote threshold required to continue debate.

Donnelly referenced Hoosier farmers who say that Waters of the U.S., or WOTUS, over reaches, and gives the EPA one-sided jurisdiction over ditches and fields.

“It protects commonsense exemptions, for isolated ponds and agricultural and roadside ditches most of which the EPA has indicated they never intended to cover,” said Senator Donnelly.