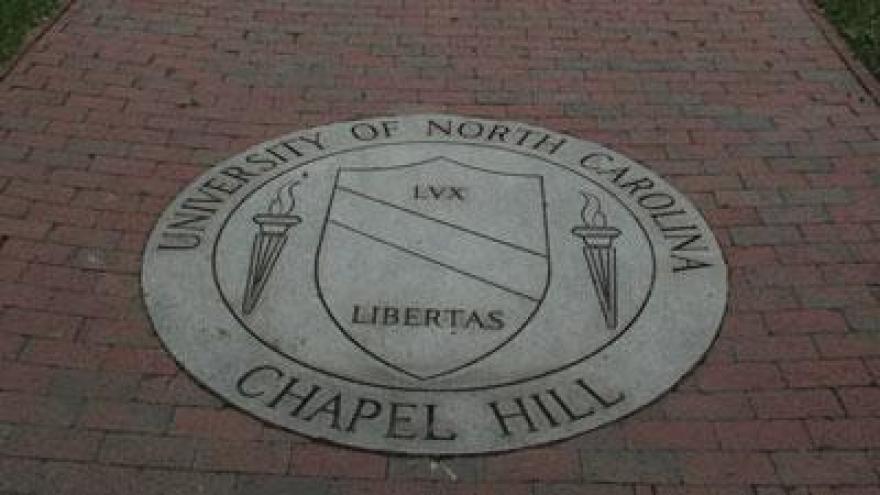 
(CNN) -- Two former athletes who took so-called paper classes at the University of North Carolina have filed a lawsuit against the school and the NCAA, claiming they represent hundreds of thousands of college athletes across the nation who are promised an education but don't get one.

Devon Ramsay and Rashanda McCants filed the class-action lawsuit in North Carolina on Thursday afternoon, leaving open the possibility for more athletes to join them. The suit doesn't just go after the paper class scandal at North Carolina -- which experts say is the worst case of academic fraud in NCAA history -- but says that cheating is a fundamental flaw of the amateurism model in college sports.

It says UNC and the NCAA and have, in "spectacular fashion," broken the promise to give athletes an education in return for keeping the millions of dollars generated each year from revenues.

Washington attorney Michael Hausfeld is the lawyer behind the suit, and he's already got a winning record against the NCAA.

Last summer, he changed the face of college sports when he convinced a judge that the NCAA violated antitrust law when it banned universities from paying athletes for the use of their images. The ruling allows athletes, for the first time, to collect a paycheck for their sport.

This time, Hausfeld and co-counsel, former N.C. Supreme Court Justice Bob Orr, are going after the main pillar that supports the NCAA's argument for not paying athletes: scholarships.

Citing instances of alleged academic fraud at schools across the country, Hausfeld wrote that the "debacle, at one of the nation's finest public universities, could not have come as a surprise to the NCAA. It had ample warning, including empirical evidence from numerous academic experts, that many college athletes were not receiving a meaningful education, including -- disproportionally -- African-American college athletes in revenue-producing sports."

He accused the NCAA of refusing to put into place precautions to prevent cheating, and instead, "the NCAA sat idly by, permitting big-time college sports programs to operate as diploma mills that compromise educational opportunities and the future job prospects of student-athletes for the sake of wins and revenues."

Regarding the lawsuit, Donald Remy, chief legal officer for the NCAA, said, "We have not yet been notified of the lawsuit filed in a North Carolina court today. Because we have not seen the filing, we have no comment."

UNC had a similar response to the lawsuit.

"We have not seen the lawsuit, therefore we have no comment at this time," said Rick White, associate vice chancellor of communications and public affairs.

Ramsay, who lives in New Jersey, and McCants, who is now playing basketball in Israel, are the first named plaintiffs in the suit. Both claimed they were enrolled in paper classes, and, according to the lawsuit, didn't know they were being cheated out of a proper education.

Ramsay was suspended from UNC in 2010 after being accused of getting too much help from a tutor, but he appealed and won and was reinstated to play in 2011, eventually graduating.

McCants, through her father, declined to comment Thursday. Ramsay directed comments to his lawyer, but said he's excited to be a part of this suit.

This is the second suit filed against UNC by a former athlete in the wake of the paper class scandal. The first one was filed by former football player Mike McAdoo, who did not graduate after getting caught up in the cheating scandal and losing his eligibility.

Last year, a CNN investigation showed that athletes at schools across the country are admitted with reading test scores that are considered by experts too low to be ready for college and are far lower than their nonathlete peers.

An internal investigation at UNC showed that academic advisers knew athletes were underprepared for school and funneled them into fake classes to boost GPAs and keep them eligible to play.

This went on at UNC for nearly 20 years. Gerald Gurney, who worked in athletics for years and has become a reform whistleblower, said it's standard practice at universities to cluster athletes into classes that are less rigorous.

"The athletes are managed by a fleet of academic advisers and a fleet of learning specialists to keep them first and foremost eligible for competition," Gurney said. "Most revenue-producing sport athletes are specially admitted, which means their academic preparedness profiles are very, very low, and as a result, the institution manages their eligibly by filtering their classes into the easiest classes on campus or in the case of University of North Carolina, no class at all."

Since 1990, there have been 37 cases of academic fraud, according to research done by Gurney and his University of Oklahoma colleague Eric Snyder and Ohio University's David Ridpath.

In the past decade, Gurney says, fraud cases have doubled.

"That is more than merely an uptick in academic fraud cases," Gurney said. "It's becoming quite commonplace. ... This is the deep, dark secret of college athletics. Now, (NCAA President) Mark Emmert often says we're not going to pay athletes, we are going to instead give them a world-class education. And in the case of revenue sports and specifically underprepared athletes who arrive at a university like the University of North Carolina, that simply is not the case. They simply cannot get the world-class education they are promised."

Taking on the NCAA -- and winning

The last time Michael Hausfeld took the NCAA to court, it took him five years, but he won, and he won big.

In that case, his lawsuit started with former UCLA basketball player Ed O'Bannon, who was upset to learn that his image was used in an E-A Sports NCAA video game without his permission.

But the lawsuit that began over video games morphed into a legal challenge of everything the NCAA stands for; it became an attack on the idea of amateurism in college sports.

Over time, O'Bannon was joined by athletes from many universities -- all with similar stories of their images being used to make millions in profits by the NCAA or by schools while they struggled financially. This summer, a judge ruled that, for the first time ever, athletes can be paid up to $5,000 per year for the use of their images.

Hausfeld built upon that lawsuit when he filed this one, focusing attention on the amount of time that athletes are required to devote to their sport versus their classes.

That's something that's been echoed by athletes across the country, at many different schools, and it was accepted as fact by the National Labor Relations Board last year. That's when Kain Colter, the former Northwestern University player who started a labor union movement at his school, testified that he was forced to change his major from premed because it didn't fit into his practice schedule.

During that same hearing, Northwestern's football schedule revealed that athletes devote 50 hours a week to their sport during the season. The labor board ruled in favor of Colter.

Ramogi Huma, president of the National College Players Association, praised Hausfeld for taking on the issue, saying he's proved "that he has the grit, resources and competence to beat the NCAA in a court of law."

The suit asks for damages but not a specific amount.

Orr, who is co-counsel with Hausfeld, said they are looking for two things:

-- Compensation for the athletes who were short-changed by academic fraud,

-- New reforms that will make sure athletes get an education when they sign up to play revenue-generating sports; specifically, Orr said, those athletes who come in unprepared.

"If you're bringing in an athlete with skills that put him behind the curve, there needs to be reform so that person can participate in athletics but proceed at a pace in a level they can achieve and ultimately get that college education," Orr said.

"This is about the delivery of qualitative education to all the men and women who are working 30 to 50 hours a week in athletics, traveling from one end of the country to the other, missing classes. Putting a system into place to make sure they're not going to be shuffled through like we saw at UNC and all around the country."