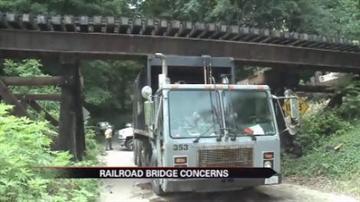 LAPORTE COUNTY, Ind. -- Crews are working to realign a damaged railroad pass in Hudson Lake. The bridge was hit by a garbage truck Thursday morning, and the low bridge has been a concern for quite a while.

"The area changes and for the traffic and the number of people traveling these roads, things need to be a little bit more modern here,” said neighbor Diane Ahart.

"The railroad was interested in raising the trestle and they felt that if they put the money into that they could then close Cottage Grove Avenue,” said Ahart.

According to county documents, the Northern Indiana Commuter Transit Department proposed raising the low bridge back in April.

But they wanted to close the grade level crossing that gives residents along Lake Park Avenue an alternative route out of the neighborhood.

"No one was in favor of closing the crossing,” said Ahart.

Based on Thursday’s accident, it's clear why this community opposed closing the crossing.

"They felt we were really at risk only having one entrance to the community,” said Ahart.

With the bridge shut down, the whole neighborhood is forced to use a once quiet street to get in the community.

"The road is very narrow and up until 9 years ago, it was a gravel road and it cannot bear the traffic going back and forth and two people crossing and things like that,” said Ahart.

In May, the LaPorte County Commissioners did not pass the closing of the crossing. But because of that, the bridge wasn't raised either.

Now, the question is when will this overpass be trucker friendly?

"I think it definitely needs to be done, there's no doubt about it. It needed to be done before this,” said Ahart.

We talked with the South Shore Line and representatives said right now crews are just working on the emergency repairs necessary to get the bridge back up and running. But plans are underway for eventually raising the bridge.