Leaving car unlocked while running an invitation for theft 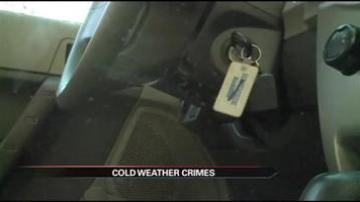 SOUTH BEND, Ind. -- Warming up your car in the morning could be an open invitation to criminals to either steal your car or the contents inside. South Bend Police say they have seen an increase in car thefts and car burglaries.

An unlocked car with keys in the ignition is a perfect scenario for thieves.

"By and large we see an increase in motor vehicle theft this time of year because people are leaving their cars unlocked and running," said Captain Phil Trent of the South Bend Police Department.

He says a large number of criminals aren't looking to make a profit.

In these cold temperatures, car theft is becoming a matter of transportation.

"A lot of the cars that are taken, especially in the winter time that are running, we find them across town two hours later. Somebody wanted to get from point A to point B," said Trent.

Trent says the South Bend Police Department has seen an increase in auto thefts as the temperatures get colder.

He recommends keeping purses, bags, and briefcases hidden, but warns that some criminals are attracted to items the average person may find as having little to no value.

"People might feel like there's nothing to steal in my car so what's the point? And really if there's change visible in the center console you might use on the toll road, or you go through the drive through and throw the change in the console in plain view. That's enough," said Trent.

Trent says there's no particular area of the city that's seeing more car thefts and break-ins than others, but to remain aware of the issue.

Though he doesn't recommend ever leaving your car unattended while it's warming up, he knows it happens.