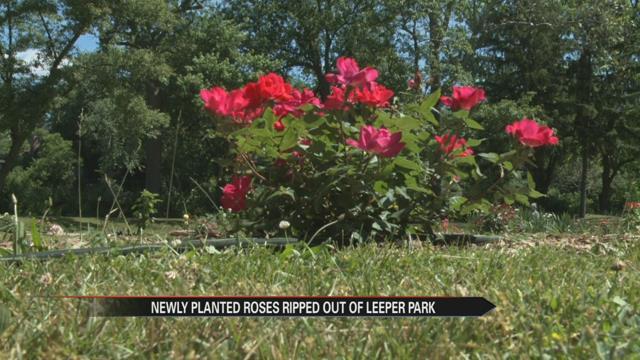 Over the past few years the Resurrect the Roses mission has been in full swing at South Bend’s Leeper Park.

Since then, a group of volunteers has been spending time rejuvenating one of the city’s oldest gardens.

Wednesday, those same volunteers, many whom view the garden as a symbol of the city’s comeback, were stunned to find some roses ripped out.

“Let’s be clear about it. The person who did this is a low life thug, a slime ball,” horticulture curator Larry Clifford said.

Clifford said sometime during the day Tuesday, four to five plants were stolen.

“From the looks of it they just pulled them out by the roots and walked away with them,” Clifford said.

They were plants that Clifford and other volunteers had spent countless hours taking care of in the newly rejuvenated, 110-year-old garden.

“In the last five or ten years it started to fall apart, was largely dead, when we came out two years ago, and we just decided to do something about it,” Clifford said.

Clifford has planted new buds in the stolen flowers’ places.

“We have an amazing group of volunteers who have worked really hard in the last year to make this garden and will carry on,” Clifford said.

In fact, right after news of the theft reached the Facebook group, numerous people offered to buy new flower beds.

“Really the volunteers are and incredible bunch of folks,” Clifford said.

Until the replacement roses bloom, Clifford says one small hitch isn’t stopping him.

“The fact that somebody, some scumbag, comes by and steals some roses is a minor setback but we’ll move on and we’ll make it even better,” Clifford said.

The official opening ceremony for the roses is still good to go.

Jazz and Roses at Leeper Park will be held on June 19, to celebrate bringing the flowers back.