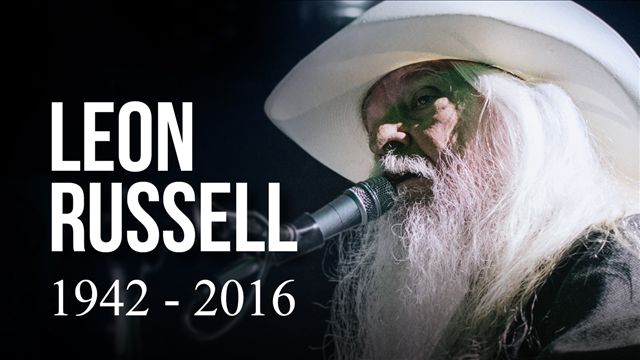 (CNN) -- Leon Russell, who emerged as a rock 'n' roll star in the 1970s after working behind the scenes as a session pianist for other musicians, died Sunday in Nashville, his wife Janet Bridges told CNN. He was 74.

Russell died in his sleep, his wife said in a statement posted on his website. Honey Bridges, his daughter, told CNN he was recovering from a quadruple bypass when his health took a turn for the worse.

Russell was inducted into the Rock 'n' Roll Hall of Fame in 2011 because of his decades of work as a pianist, guitarist and songwriter.

After recording in the 1960s with a group of Los Angeles session musicians nicknamed the Wrecking Crew, Russell captured the public's attention as the top hat-wearing pianist and bandleader on Joe Cocker's "Mad Dogs and Englishmen" tour in 1970.

While Cocker twisted and grimaced through his vocals, Russell calmly controlled the stage with gestures and looks, earning him the nickname, "The Master of Time and Space."

He went on to become a headliner throughout the 1970s, captivating audiences with his sweaty, gospel-inflected performances. Russell also collaborated with a who's who of famous musicians.

He wrote and performed hits like "Tightrope," "Delta Lady" and "Song for You," which was covered by a host of musicians and became a hit for Ray Charles. "Superstar," co-written with Bonnie Bramlett, rose to No. 2 on the pop charts when covered by The Carpenters, according to Russell's official website.

With George Harrison and Bob Dylan, he was a prominent player in the 1971 "Concert for Bangladesh" at Madison Square Garden, one of the first big charity concerts. The resulting recording won a Grammy for album of the year.

Though still active, Russell became less popular over the following decades. With friend Willie Nelson, he co-hosted the first of Nelson's annual 4th of July picnics. He also released country records and collaborated with Elton John on the 2010 album "The Union."

John praised Russell on Instagram, saying: "He was a mentor, inspiration and so kind to me. Thank God we caught up with each other and made 'The Union.' He got his reputation back and felt fulfilled. I loved him and always will."

Russell was born Claude Russell Bridges on April 2, 1942, in Lawton, Oklahoma. His website says Russell was playing clubs in Tulsa at the age of 14 and that his band, the Starlighters, went on the road with Jerry Lee Lewis for two months.

After moving to Los Angeles, Russell played clubs and became an in-demand session player on dozens of hit records for other musicians, including Bobby Pickett's novelty hit "Monster Mash" in 1962 and "This Diamond Ring" by Gary Lewis and the Playboys in 1965. He also played on records by the Byrds, Herb Alpert and Phil Spector, Rolling Stone said.

Russell also played piano in the Shindogs, the house band on the ABC live music show "Shindig!" In the late 1960s he founded Shelter Records with Denny Cordell, where he recorded his first solo albums.

Russell is survived by his wife, four daughters, and three grandchildren. A private service is planned in Nashville, with a public service planned in Tulsa.

"He was really sweet and he had a dry sense of humor. He was very funny," his wife told CNN.

Tributes started pouring in Sunday from other musicians. "Farewell friend. It was an honor to watch you work," tweeted Derek Trucks and Susan Tedeschi of the Tedeschi Trucks Band.