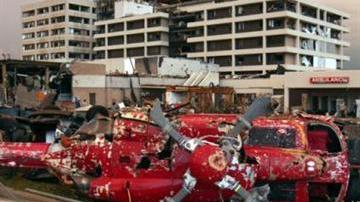 Those in Joplin on May 22nd when the EF5 Tornado ripped across the city have been visiting hospitals across the country explaining what they learned during the tragedy.

160 people were killed during the tornado that crossed across a residential and business section of the town on high school graduation day.

"It was really hard to not only see the injuries and the fatalities that occurred there but the loss of the physical plant of the community as a whole," Bob Denton with Freeman Health System said.

Denton, a registered nurse, was one of the first to jump into action on May 22nd he said a lot of things went right to save lives but they also learned a lot.

Denton pointed out that by conducting drills with the other hospital, St. John's Regional Medical Center proved to be a problem during the tornado.

St. John's just six blocks from Freeman Health System was destroyed in the tornado. All the patients from St. John's had to be moved to Freeman, all the injured also rushed in.

Freeman Health System also suffered damage in the storm, but nothing like St. John's. Had the tornado touched down just six blocks earlier, both major medical facilities in the town would have been out of commission.

"At Freeman Health System we were the only illuminated structure for miles and miles around. It really was a beacon of hope and a beacon of light for the community.

Memorial Hospital welcomed Denton and others from Joplin to share what they learned so that if South Bend were ever in a similar situation.

"Hopefully we never have to go through what they went through in Joplin but if we did I think just hearing from them first hand about what they learned so we can take some of those lessons learned and implement them, "Kelly Jolliff, with Memorial said Friday.

"That personal preparedness is really one of the most important things that I think all of us can do," Jolliff said.

Dorman said at the event that he hasn't been back to Joplin because it's too difficult. He choked up talking about Will Norton, a Joplin High School senior that died on his way home from graduation. Norton was sucked through the roof of his Hummer, his body found days later in a nearby pond.

Denton said he will be heading to St. Louis next to talk to a hospital there.