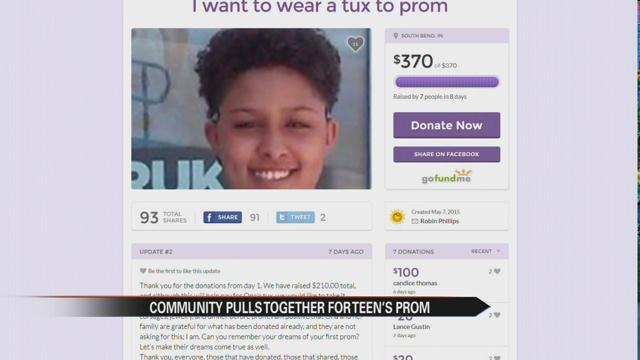 It's prom night for many South Bend students.

Finding the perfect dress is one of the biggest concerns for most teenage girls.

But one Adams High School senior just wants to be herself on the biggest night of the year.

While most teenage girls are shopping for dresses, she's putting the final touches on her daughter's tuxedo.

“Be who you want to be," said Morgan. "I don't want her to hide who she is from anybody.”

Adreona or “Ona” as she likes to be called, came out to her separated parents, and told them she wanted to wear a tuxedo instead of a dress to prom.

While her mother was supportive, her father didn't understand.

So without his financial support, buying the tux became a struggle.

So the teen's cousin stepped up to help.

She started a Gofundme page for Ona.

The support was overwhelming.

“Donations just started flowing in after that and it was like not even an hour after and we started getting money so it was really surprising,” said Ona.

Almost $400 later, Amber is happy her daughter will have her dream prom and most importantly, be herself.

“It's just nice to see that there are other people out there that supported it,” Amber said.