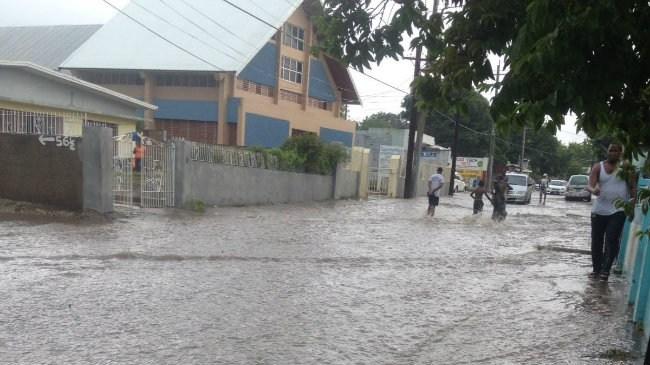 Editor's note: Are you affected by Hurricane Matthew? If it is safe for you to do so, WhatsApp us on *+44 7435 939 154* to share your photos, experiences and video. Please tag #CNNiReport in your message.

The storm packing 140-mph winds has killed at least two people, caused cruise ships to change course and prompted the governors of Florida and North Carolina to declare states of emergency for coastal areas.

Rain and wind thrashed Haiti on Monday night and up to 40 inches of rain could be dumped on the impoverished nation still recovering from a 2010 earthquake.

"This rainfall will likely produce life-threatening flash floods and mudslides," the US National Hurricane Center said. "Preparations to protect life and property should be rushed to completion."

The eye of the storm is expected to make landfall around daybreak Tuesday, said CNN senior meteorologist Taylor Ward. That will probably happen off the western tip of the Tiburon Peninsula, which includes most of Haiti's southern coast, the hurricane center said.

At 8 p.m. ET Monday, the category 4 hurricane was moving about 7 mph and was 200 miles southwest of Port-au-Prince and 120 miles south of Tiburon, the hurricane center said.

Southern Haiti and southwestern Dominican Republic can expect 15 to 25 inches of rain with possible isolated downpours of up to 40 inches. Eastern Cuba, northwestern Haiti and the southeastern Bahamas could see up to a foot of rain.

"Destructive waves" could push the storm surge to between 10 and 15 feet in parts of Cuba, Haiti and the Bahamas, the center said.

Ward said Jamaica may avoid the worst of the storm, but receive enough rain that flooding will occur because of poor drainage. The government dropped its hurricane warning Monday afternoon.

"Conditions will quickly go downhill in Cuba throughout the day Tuesday with a landfall in the eastern tip likely late in the afternoon," Ward said. "Matthew will then take a prolonged trip through much of the Bahamas from overnight Tuesday through Thursday afternoon."

The predicted long-term portion of the storm track moved much closer to the United States on Monday, Ward said.

Rick Knabb, director of the hurricane center, tweeted, "U. S. East Coast: find out today if you live in an evacuation zone. If so, decide where you'd go, how you'd get there if told to go #Matthew"

Two people have died because of Hurricane Matthew within the past week, authorities said.

In Haiti, Guillaume Albert Moleon, director of communications for the Interior Ministry, said one fisherman died on Sunday. A second fisherman is presumed dead, but his body has not been recovered.

In St. Vincent and the Grenadines, a teenage boy died in a landslide as he was cleaning a drain behind his house, according to Michelle Forbes, deputy director for the National Emergency Management Office. The boy died Wednesday after storms from Matthew passed over the island.

Multiple cruise lines have rerouted some trips to get out of Matthew's path. Royal Caribbean, Disney Cruise Line, Norwegian Princess and Carnival have rerouted trips, with more changes possible.

A Carnival cruise ship that planned to stop in the Bahamas on a six-day excursion will instead visit Cozumel, Mexico, reported the Post-Courier in Charleston, South Carolina.

The hurricane could be especially devastating for Haiti as much of the country's infrastructure remains weak after the 2010 earthquake that killed more than 200,000 people. Haiti continues to recover from a post-quake cholera outbreak that killed another 10,000.

The US State Department issued a travel warning on Sunday urging Americans in Haiti to leave as quickly as possible.

"Airports will close once conditions deteriorate," the State Department said.

Bracing for a monstrous storm in Jamaica

Over the weekend, Jamaican officials opened storm shelters ahead of the nation's first major hurricane since Gilbert in 1988.

"[This hurricane] is something Jamaica has not seen in decades," Desmond McKenzie, Jamaica's minister of local government and community development, told CNN affiliate WPLG.

Kingston resident Marcia Forbes, who survived Gilbert, told CNN she has seriously prepared for a rough couple of days. She waited in line to fill her car with gasoline. To protect her multimedia business, she placed sandbags against office shutters and covered computers with plastic.

About 3 a.m. Monday, the Norman Manley International Airport near Kingston announced on Facebook it was shutting down until Tuesday morning.

Jamaica Prime Minister Andrew Holness urged government workers to facilitate a speedy recovery to ensure "our economy does not suffer unnecessarily," The Gleaner reported him saying.

"We will see significant damage to property and dislocation and human suffering that will come from such an event if we do not prepare," Holness said, according to the newspaper.

Some Jamaicans believe they can ride out the storm, and say they're putting their trust in a higher power, despite pleas from authorities to leave the threatened coast.

Several women from Port Royal, a fishing village outside Kingston, said their families would hunker down in the nearby St. Peter's Church, placing their faith in God.

One woman who sought refuge there told CNN the government always warns people to leave before storms. Though at least 14 people died during Hurricane Ivan in 2004, she lost only the roof on her house, she said.

She conceded fear with Matthew, as she did during Ivan, but said, "You know, I trust in God."

The storm could be brutal for Cuba, where many houses appear too weak to withstand a hurricane.

Military trucks raced around Santiago, the island's second largest city, to finish preparations. Four years ago, Hurricane Sandy ripped through the city, downing trees, power lines and killing 11 people in the area. To prepare in advance, residents spent Sunday securing their roofs and collecting cash wired from relatives in Florida.

Some people left coastal areas for government shelters, while officials warned inhabitants of the Sierra Maestra mountains of possible mudslides.

"We have endured a lot of hurricanes here," a man named Orlando, a property manager who feared for his investments, told CNN. "We will endure this one."

What about the United States?

The United States, taking no chances, began airlifting 700 family members of military personnel stationed at Guantanamo Bay to Florida. It's unclear when the evacuees will return, officials said.

Base officials said remaining personnel would seek shelter in designated locations including their homes.

Sixty-one detainees, who remain at the facility where the United States holds prisoners it accuses of being enemy combatants, will not be evacuated, officials added.

The US government issued a travel advisory for Americans going to Cuba, saying: "Airports will close once conditions deteriorate and safe travel is not possible. If you do not already have travel arrangements, you should immediately shelter in place in a secure location."

On the American mainland, North Carolina Gov. Pat McCrory declared a state of emergency for 66 counties in the central and eastern portions of the state. Florida Gov. Rick Scott made a similar declaration for all counties.

Forecasters cautioned it was too early to predict whether Matthew would directly strike the United States.

"This dangerous storm will be closely monitored," the National Hurricane Center said.