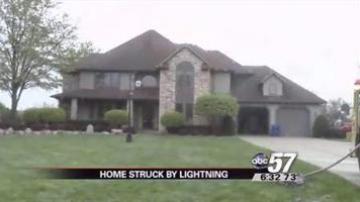 ELKHART COUNTY, Ind. – With all the rain and wind blowing through Indiana, one very unlucky homeowner in Elkhart County suffered some storm damage.  His chimney was struck by lightning and caught on fire.

The homeowner did not want to appear on camera but neighbors say they heard the lightning strike the chimney all the way down the street.

“Well I was in the house and all of a sudden I heard this loud crash that sounded like it was in my backyard.  It made me jump.  I did not know what happened, but I figured lightning had struck somewhere”, said neighbor Brittney Griffee.

The lightning had struck a house, five doors down from where Brittney Griffee lives.

“The homeowner said he was sitting in the living room when he saw a bright flash and after the flash he started smelling smoke through the house”, said Cleveland Assistant Fire Chief Michael Graham.

Five different fire departments were called to put out the fire, however it was mostly smoke.  Firefighters had to put holes in the roof to make sure there weren’t any cinders burning.

The assistant fire chief says storm damage calls have been kept to a minimum so far this year.

“This was the first one of this year.  We were actually at the station working and we also noticed the big lightning flash and did not think anything of it, but we noticed a lot of the phone lines and stuff started acting up so we knew it was close”, said Graham.

He says sometimes people do not call, because they do not think the damage is that serious, but he says better safe than sorry.

“If you start smelling smoke and stuff like that I would definitely call.  It is not really an emergency, but it becomes an emergency if you do not do something about it right away”, said Graham

While she is glad everyone is okay, Griffee says she feels bad for her neighbors having to repair their home.

“It is really sad.  It is a huge house.  It has been there for a long time.  We have not had anything like this happen this close to home”, said Griffee.

The homeowner also told ABC 57 the sad part is he planned to put the house on the market in two months.  But he already had roof repairmen out today, so he may still be able to.