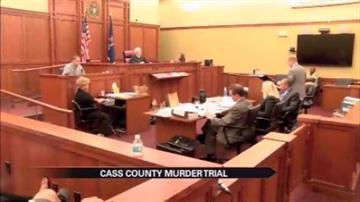 CASS COUNTY, Mich. -- In the fifth day of testimony of the Keith Lintz double murder trial, a former cellmate testified about statements Lintz made about the murders of Carolyn and John Tarwacki.

Lintz is accused of beating, stabbing and shooting the couple int heir Niles home in February 2010.

Shane Zimmerman told the jury a few weeks after the murders lintz approached him with an offer to buy a nickel plated .38 caliber Taurus revolver with a black rubber grip.

He says he didn't see Lintz again until January 2011 inside the Berrien County Jail where the two had several conversations.

One of those conversations was right after Lintz was given a polygraph at the jail.

"They asked him about a psycho-induced hypnosis and he said he had froze up, and then that's when he told me that they hit it on the head," said Zimmerman.

Zimmerman says he felt compelled to share what he had learned so police put him the same cell as Lintz to gather more information.

They were in a cell together for four days.

Zimmerman said Lintz told him about dreams he was having.

"The way he would describe it was that he was beating them with his fist, and then stabbing them, and then shooting them," said Zimmerman.

And shed light on how Lintz may have gotten into the Tarwacki home.

"He had said something about they had let me in," said Zimmerman.

Zimmerman says he heard something that convinced him Lintz murdered the Tarwackis.

After Zimmerman got the information he was sent in for, he requested to be removed from Lintz's jail cell.

"At the time, I didn't want to be in there because I felt like I was just going to hurt him myself," said Zimmerman.

Zimmerman's mother met with and hugged members of the Tarwacki family after her son finished testifying. She said he just wanted to do the right thing.

Zimmerman returned to jail after testifying. The state asked the judge to ask the media not to show his face in order to protect him from other inmates, but the judge denied the request.