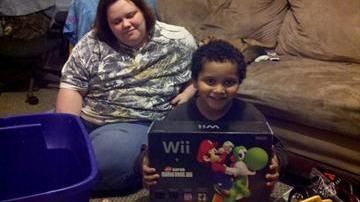 Lisa Turner, lost her mom, friend and everything she owned when her house exploded in November.

Turner and her 7-year-old son Eric narrowly escaped the explosion.

Lisa pleaded on TV for help this Christmas for her son admitting that she had no gifts and no money to buy him any. Eric asked for a Wii game system and a puppy.

"I saw the story you put on Facebook and my heart broke for the family," Jason Anderson said.

Jason and his wife, Shannon donated toys for Eric.

"We have a son that is 7-years-old and if that happened to us and he lost everything, I couldn't imagine."

The Andersons donated an entire tub of toys and several Wii games.

An anonymous donor came forward after seeing the news story and bought Eric a Wii game system, accessories and games.

"Thank you for the Wii game," Eric said with a big smile on his face.

This will be a tough Christmas for Eric. It will be the first without both his grandparents. Eric's grandpa died last year on Christmas day from Cancer.

Several other people also came forward. There were so many gifts that some will be saved to open on Christmas day.

A person also stopped by with not one, but two puppies for Eric.

"If there was a way to pay everybody back I would in a heart beat," Turner said.