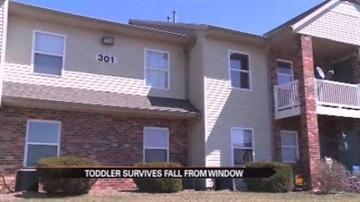 GOSHEN, Ind. -- A resident watched helplessly as a young girl fell from a second story window at the Arbor Ridge Apartments on Arbor Court Friday night. The neighbor ran to help the girl as she called 9-1-1.

Rebekah Garboden was just getting home around 10 on Friday night when she heard kids playing outside.

"I came home and I saw two little kids walking around on the roof and they were just in diapers. I started walking over to wake up the parents or something to keep an eye on them,” said Garboden.

Garboden called out to the children from across the street.

The little boy crawled back in the window and the little girl tried to follow.

"It looked like he was trying to pick her up but wasn't strong enough. So she kind of turned around and started walking and then she slipped and fell off the ledge,” said Garboden.

The girl fell several feet into a bush and started crying.

"I just started running and I yelled and tried to dial at the same time and tried to get to her as soon as possible to make sure she was ok,” said Garboden.

Neighbors say when police and paramedics arrived, the parents still had not emerged from the apartment.

One neighbor said police had to kick in the door to find the mother while paramedics put the little girl in an ambulance with another neighbor.

"She didn't seem too scared. Or she was happy with whoever the neighbor was that she knew,” said Garboden.

The little girl was released from the hospital with just minor cuts and bruises.

As a mom, the event was disturbing for Garboden.

"It's sad. You see every kid as your kid and you want only good things. You just feel sad when you see kids not being treated the way you would treat your kid,” said Garboden.

We talked to the CEO and president of La Casa who said the window does have a lock on the inside and all residents are given screens for their windows. If they want to remove them, they are allowed to do that.

He also confirmed there were no maintenance requests for the apartment.

The complex manager said the kids have been taken into state custody.

So far there have been no charges filed in this case.