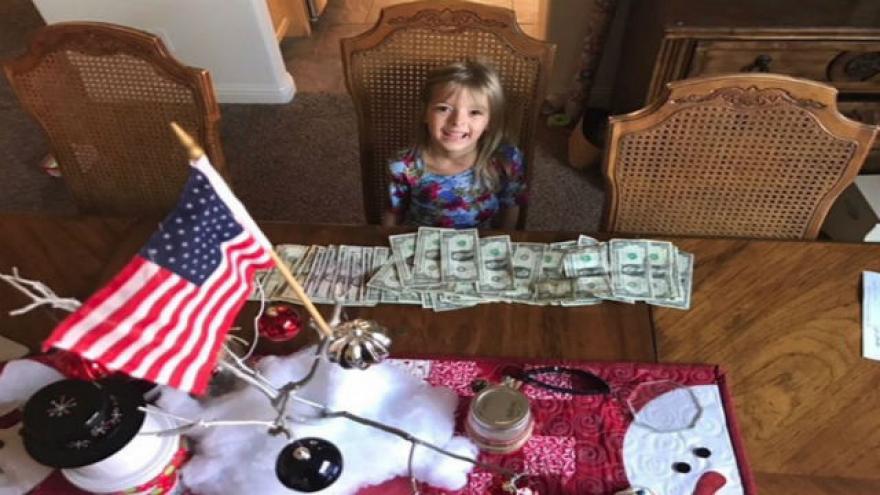 "It was a big fire. I saw video of it," she said on the phone from her home in Nipomo, California. "A daddy on the fire died."

Faye had heard the news about Cal Fire engineer Cory Iverson -- who was killed while battling the same Thomas Fire in Ventura County.

Faye's mother Kylee told her daughter that sometimes bad things happen, "but we have to focus on good things."

When Faye said she wanted to give money to kids of deceased firefighters to have extra toys for Christmas, the mother and daughter hatched a plan.

Money from chores going toward fund

Faye emptied a glittering gold child's purse of seven single dollar bills to start her own fund for the Wildland Firefighter Foundation.

The foundation helps support the families of deceased and injured firefighters.

"She was saving that money from chores to buy a My Little Pony," said Kylee, who also has a 2-year-old son, Jadon.

"I gave her my tips from the Elk Lodge in Oceano where I work. The fund grew to $111 and just hasn't stopped."

According to the foundation's website, families don't receive any benefits after a fatality for three months and injured firefighters only receive 60% of their base pay. The death on the Thomas Fire was the second time in months that little Faye heard about a daddy firefighter dying.

Helming left behind a wife who also works for the Forest Service, and three young children. Faye's contribution will help the Helming family, Kylee said.

"Faye can hear me on the phone talking about these tragedies, the fires," Kylee said. "The fire community is close."

Johnny Segraves works out of the Pine Canyon Fire Station in the back country east of Santa Maria.

Kylee said that during much of the Thomas Fire her husband had provided structure protection in Montecito.

That means Johnny Segraves, who Kylee estimates makes $38,000 a year in base pay as a federal government employee, helped saved multimillion-dollar estates.

"We miss him when he is on the fire line," Kylee explained. "But if he doesn't work overtime we won't make ends meet."

She estimates her husband has worked 800 hours of overtime in the hellish and unending 2017 fire season.

"He's getting off the Thomas Fire and we're going to open presents and celebrate Christmas early. He might be working Christmas Day. "

Where ever he winds up, Johnny Segraves will know his little girl delivered a lasting present.

It's not just the money raised for kids whose "daddies died."

Her actions have given people a glimpse into the heartbreak and challenges facing wildfire firefighters' families.