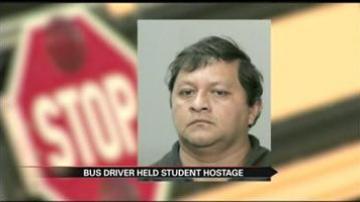 TEXAS -- It was a frightening ride home for a 12-year-old girl when police say her bus driver held her captive and molested her on the school bus.

Forty-four-year-old Carlos Guzman held her on the bus for about 20 minutes, touching her inappropriately and even kissed her on the neck.

Co-workers told reporters that they could hardly believe it.

“He's a very respectful guy. He's a friend of mine, he's real nice, he helps me around with a lot of things. No, that don't sound right, I don't think he would do something like that,” said bus driver Brittany Jones.

Guzman is charged with felony unlawful restraint, but authorities say more charges could be coming. He has also been fired by the school district.