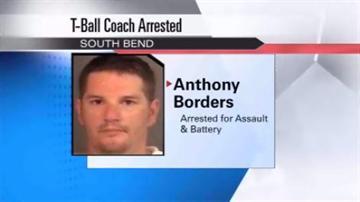 SOUTH BEND, Ind. -- A fight at a South Bend T-ball game ended with one coach behind bars and another in the hospital.

"I said fine. I couldn't resist those little blue eyes of his,” said Cantu.

On Saturday they had a game at the Maurice Matthys Little League Park on South Bend’s west side.

"We like to have fun. We try to teach but at the same time want everyone including the parents to enjoy the game,” said Kevin Weinberg, Little League District 11 Administrator.

Weinberg was at a different diamond on Saturday.

"I hear somebody yell there's a fight going on,” said Weinberg.

"All of a sudden we were arguing and I was on the ground- I didn't see it coming. I didn't know what happened,” said Cantu.

Cantu admits there was bad blood between him and the opposing coach right from the beginning on Saturday.

Weinberg had to stop over in the first inning and tell Cantu to cool it when he heard him using profanity.

"We do not tolerate that in any of our parks,” said Weinberg.

He ran back the second time.

"I was on the ground and when I looked around I knew there was a couple of my kids that were crying,” said Cantu.

Next thing he knew, he was bleeding and police were there.

Police say one coach claimed to have been assaulted by another and witnesses say another coach was involved but by the time the police arrived the third coach took off.

Cantu was rushed to the hospital with multiple injuries including to his ribs and thighs.

“I did have a broken nose and broken blood vessels in my eye,” said Cantu who was getting ready to go to his doctor on Monday.

If you were at the game and took pictures or video of the fight, police would like to hear from you.

The investigation is ongoing and there could be other charges filed.